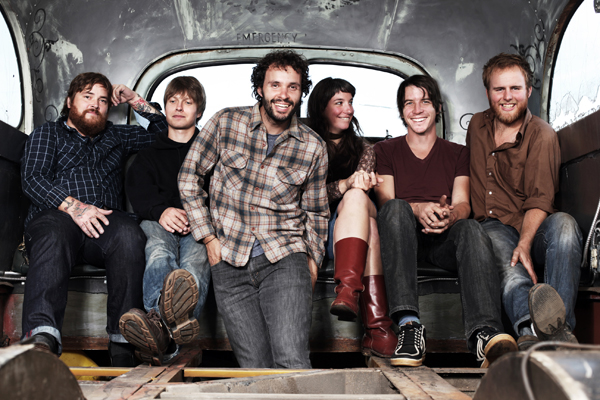 Following their hugely successful tour with The Decemberists in March, Portland’s BLIND PILOT will return to the UK next month for festival dates and an exclusive headline London show. The band will perform at Hop Farm Festival, Wireless, and then a headline show at Hoxton’s Bar and Kitchen on July 5th.

Having recently recorded a brand new album, the follow up to their magnanimous debut 3 Rounds and a Sound, Blind Pilot are ready to make a big impact when they return later this year. Full details of the record will be revealed very shortly, as the band prepare for a busy summer of gigs and festivals around the world.

There’s no shortage of angles to Blind Pilot’s story so far: the tours by bicycle, the sheer volume of iTunes downloads, the dizzying ride from relative obscurity to headlining a national club tour in less than a year. But the real story of Portland, Oregon’s Blind Pilot is about the songs. Led by the acoustic guitar and gentle voice of songwriter Israel Nebeker, Blind Pilot’s heartfelt music is the sort that cultivates devotion among fans, that elicits sing-alongs at concerts, that inspires late night mix tapes.

Portland is a city positively littered with folk-pop bands, but the sincerity and modesty of Blind Pilot’s music stands out from the pack. Once heard, the gorgeously seductive songs are not easily shaken or forgotten, as more and more people are discovering. The band has performed on Carson Daly’s show, has opened arena shows in England, has been selected as iTunes’ Single of the Week—but these achievements belie the intimacy of the group’s music.

The songs of 3 Rounds and a Sound have stood up after countless miles of road travel, and Blind Pilot has evolved into a live unit whose group dynamic elevates the music with a seemingly effortless grace. Near the start of their journey, the band has reached a broader audience than they’d ever imagined, yet unwilling to make themselves comfortable they’re ready to begin the next chapter of their story.

MOBY ‘Lie Down in Darkness’ single out August 15th