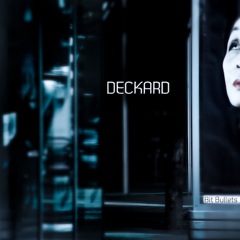 Quantum Bit Net Label releases on June 16th 2011 the album “Bit Bullets” composed by th musician/producer Deckard under the sign of Gemini and Creative Commons. The Big Ben generating the creative flux of Deckard is a concert of Sakamoto and Noto that took place in Bari at the Auditorium Ex Gil. The performance of the experimental duo is so transcendental and totalizing that stimulates in D. a totally new and radical impulse, from that cathartic moment the entire production will be conditioned by that sensorial experience and will turn to the representation of Dualism.
“Bit Bullets” expresses this concept in music with the contrast and the balance between the extreme sounds of the acoustic spectrum; the compositions stand on a fragile medium band sustained as a nylon thread between two imposing pillars made of very high and bass sounds; the exotic and oriental melodies contaminated by dirty and glassy filters worriedly look for a space among the hard, industrial and distorted rhythms.
The sampling serves the timbre research, not the architecture of the tracks.
The sound environment awakens imaginific travels drifting beyond the anthropologic limits, in times not lived yet, in a technological era where the space for humanism becomes synthesis and the clone is both biological and intellectual.
Mutism is an element, a choice, not a lack; the rare times you hear voices they’re robotic ones. Deckard, who owes his pen name to the character interpreted by Harrison Ford in Blade Runner, composes all the tracks of the album in the period that goes from June 2006 to July 2010, looking for a central thread.
The album contains 12 tracks; two siamese phases evolve with two different characters in a sole body, this Dualism will try, later, a traumatic splitting to rejoin inevitably in the final track “Atheism Religion” in a meditative embrace lost in a human, atavistic doubt.

music by Deckard
composed and decomposed from 2004 to 2010