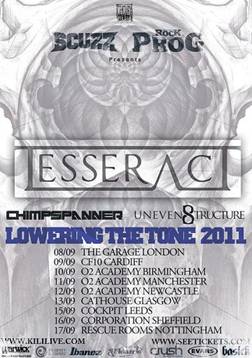 UK pioneers of the rising Djent scene, TesseracT, have announced they will be heading out on their first UK headline tour since the release of the critically acclaimed album ‘One’ released earlier this year through Century Media Records.

“This is going to be bad ass! We’re really excited to be going on the road with two stunning groups that will both raise the bar every night. To be back again touring in the UK is always a pleasure especially as we’ve now played more shows outside the UK than we have at home But to be back and also on our first headline tour since the release of our debut album is going to so much fun. Hell, its worth the ticket price for just Uneven Structure and Chimp Spanner, let alone with us as well! Expect a night of amazing musicianship and deep…deep groove.”
Amos Williams, Bassist