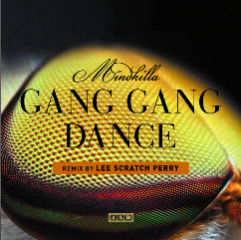 Propelled by the tight pulsating beats from Jesse Lee, and eerie and ambient samples rising from the keyboards of Brian DeGraw and guitar of Josh Diamond, ‘MindKilla’ mixes lyrics borrowed from ‘Hush Little Baby’ and Lizzi Bougatsos’ vocal delivery lends a deeply sinister edge to the usually innocent traditional lullaby.

Placed in the hands of veteran reggae producer Lee “Scratch” Perry, ‘MindKilla’ has been stripped bare and transformed into an 8-minute wonder, interlaced with the Jamaican pioneer’s hallmark rhythms and charismatic vocals.

“I did have a great fun in the studio in Negril (Jamaica) recreating the riddim. The ingeneers and people around also enjoyed the vibes and the great voice of Lizzi. All the blessings for the remix from LSP.”

“I feel blessed…like ACTUALLY blessed…to have made some form of musical communion with LSP. I think about him a lot in day to day life but never really imagined our paths would cross in any other way. And I really have to give it up for anyone who gets handed a song about fear and turns it into a club banger about eating cops. Perfect.”