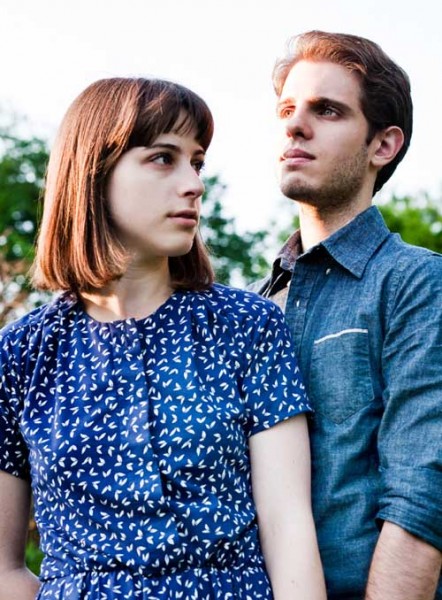 On 12th September, Sub Pop Records will release a fully re-recorded,
remixed and re-mastered version Memoryhouse’s ‘The Years’, adding two
new tracks entitled “Modern, Normal” and “Quiet America.” The Years was
re-recorded and mixed by Evan Abeele with the help of Daniel Gray in
Toronto. While technically an expanded and improved reissue, this
version of The Years will be the first time the EP has been made
available on CD or LP. This is exciting.

Memoryhouse, the duo of Evan Abeele (composer) and Denise Nouvion
(vocals), hail from Toronto, Canada. Their music blends the contemporary
with the forgotten, the traditional and the technological, the visual
and the aural, within the sonographic landscape of pop.

The duo’s discography consists of two 7” singles, “Lately (Deuxième)”
b/w “Lately (Teengirl Fantasy Natural Mix)” on Inflated Records and the
“Caregiver” b/w “Heirloom” single on Suicide Squeeze Records, and a
self-released, digital-only EP entitled, ‘The Years’ which was
originally released in February 2010. ‘The Years’ earned praise from
Stereogum, AOL Spinner, The Line of Best Fit, and Pitchfork, among
others. And Pitchfork had this to say about the original release: “…the
EP clearly sets Abeele and Nouvion apart from their more amateur peers.
‘The Years’ may be awash in nostalgia, but far from inviting unfavorable
comparisons, it mostly confirms that the past was indeed as good as you
remember.”

COMPILATION ALBUM
VARIOUS ARTISTS – ‘Our Lives Are Shaped By What We Love’ (Light In The
Attic)
‘Our Lives Are Shaped By What We Love: Motown’s Mowest Story
(1971-1973)’ is the first ever Mowest anthology, dedicated to the label
set up by Motown founder Berry Gordy Jr. in ’71. A Detroit native, the
new L.A.-based imprint was dedicated to coastal grooves and an eye
towards the top of the charts. Light In The Attic have lovingly
re-mastered from the original tapes classic cuts of sweet soul,
heavyweight funk, and even a dose of potent West Coast hippy rock.
Syreeta, Sisters Love, The Commodores, Frankie Valli & Four Seasons and
G.C. Cameron are all on here, and it’s released with extensive linear
notes and unseen photos. The double LP is housed in an old school
gatefold tip-on jacket. Lovely.
http://lightintheattic.net/

SINGLE
ELEPHANT – ‘Allured’ (Memphis Industries)
French-by-way-of-Pontefract chanteuse Amelia Rivas met Christian
Pinchbeck back in May 2010, since when they’ve been quietly creating
some hauntingly fragile songs as Elephant. As with debut 7″ ‘Ants’,
second single ‘Allured / Actors’ has a sense of mystery and history that
belies their teenage years. So side A, ‘Allured’ strips away layers, to
produce a pure expression of the confusion of love (and lust). Amelia’s
disjointed lyricism speaks of anatomy and of carousels, hinting at both
the poetics and mechanics of unrequited desire. And on the AA side
‘Actors’, Elephant explore the tension of attention, both the craving to
be noticed and the desire to melt away into the crowd. Irresistable stuff.
http://www.myspace.com/elephanttheband/stream

SINGLE
THE CROOKES – ‘Chorus Of Fools / Bright Young Things’ (Fierce Panda)
Two of the more poppier, upbeat numbers from The Crookes’s acclaimed
‘Chasing After Ghosts’ longplayer, both epitomising The Crookes’ cunning
method of using shiny melodies to disguise a haunting sense of loss and
longing. Not for anything does ‘Chorus Of Fools’ lament “It was clear
that you and me were fated to be so damn blue”. The Crookes play these
shows to coincide with the release of ‘Chorus Of Fools’ / ‘Bright Young
Things’:
19th July London, The Lexington
24th July Sheffield, Tramlines Festival (with Ash)
http://www.thecrookes.co.uk/

LIVE – FOUND
Never short of – how should we put this? – unconventional ideas, FOUND
are currently working with an equally adventurous baker friend to
develop a prototype template for a playable chocolate 7” single to
accompany ‘Anti Climb Paint’s release. The plan will be for a launch
party at the bakery in Fife (http://www.fisheranddonaldson.com/) on 26th
June in front of a very select group of invitees and ‘golden ticket’
competition winners who will have a chance to ‘consume’ (that’s buy with
an option to eat) the limited edition pressing.
Space for this show will be extremely limited, but hit back for
guestlist requests:
FOUND live:
26th June – Fisher And Donaldson Bakery, Fife

JOHN GRANT & MIDLAKE at the ROYAL FESTIVAL HALL in September