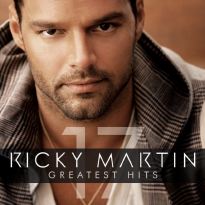 All the classic hits including ‘Livin’ La Vida Loca’ and ‘She Bangs’, and 2 brand new tracks.

Grammy Award winning and Latino icon Ricky Martin is set to release his much-anticipated Greatest Hits on 11 July 2011. Just in time for summer this 17-track album is a collection of his greatest songs to date including the global smash hits ‘Livin’ La Vida Loca’, ‘She Bangs’, ‘Shake Your Bon Bon’ and many more.

Ricky Martin’s new collection also includes some exciting collaborations and duets with the likes of Christina Aguilera on ‘Nobody Wants To Be Lonely’ and the recent US hit ‘The Best Thing About Me Is You’ featuring Joss Stone. Making this a really special album, it showcases Ricky Martin’s impressive live talent on the track ‘Pegate’ from his MTV Unplugged session, and his brand new single, ‘MAS’, a massive club floor anthem.

With a global chart-topping career that has spanned over two decades, Ricky Martin has sold more than 55 million albums worldwide. His first English-language album ‘Ricky Martin’ was released in 1999 to worldwide acclaim. The first single ‘Livin’ La Vida Loca’ shot to Number One in over fifteen countries, with the album selling over 22 million copies worldwide giving it Platinum status seven times over and making it one of the biggest selling albums of that year.

Born in Puerto Rico, Ricky Martin has achieved huge success recording in both English and Spanish, demonstrated beautifully on the track ‘Non Siamo Soli’. He has won three Latin Grammys and one Grammy for Best Latin Pop Album, proving that he is a truly diverse and exciting artist that continues to transcend genres.

This is the ultimate album for the summer, with 17 incredible Latino and booty-shaking songs from the global sensation that is Ricky Martin.
Full Track Listing:

4. Shake Your Bon-Bon
5. Nobody Wants To Be Lonely (with Christina Aguilera)

12. The Best Thing About Me Is You (featuring Joss Stone)

13. Spanish Eyes/Lola, Lola (Medley) (Music from “One Night Only” Video)