Sasha and Burn Studios present ‘The Search for the Next Producer Star?’ 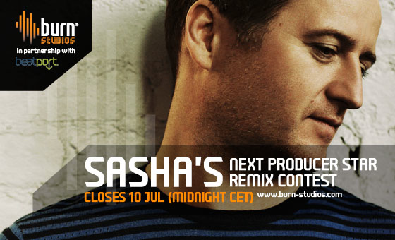 This summer burn studios will team up with legendary DJ and producer Sasha and electronic music portal Beatport to search for the most exiting, up-and-coming music producers from across Europe. Fourteen talented electronic music stars of the future will win the chance to take part in an exclusive production bootcamp at the burn studios Hacienda in Ibiza, with mentoring from some of the industry’s leading names including Sasha himself. The overall winner of the competition will then be flown to New York to collaborate with Sasha on his much-anticipated third artist album.

“I’m delighted to be involved in the burn studios Next Producer Star project and nurture the next generation of electronic producers. I am looking for music makers who have the ability to create something entirely new and fresh-sounding, good luck to you all!” Sasha

To be in with the chance of winning this money-can’t-buy opportunity entrants must remix Sasha’s 2011 IMS anthem ‘Cut Me Down’. Download remix parts on burn-studios.com or Beatport. Then create your remix using burn studios audiotool the free online studio App. Entries must be uploaded to burn-studios.com before 10th July 2011. The 14 winning producers will be flown to the burn studios Hacienda in Ibiza. a state of the art equipped villa where burn studios will relocate for the summer. They will then take part in a 5-day intensive production bootcamp from 26th July to 30th July developed by SAE Institute, which includes mentoring sessions and master classes from some of the biggest names in the industry. The producer with the most votes overall for their remix will go on to be crowned winner and be awarded the incredible opportunity to fly to Sasha’s studio in New York to collaborate on his next release!

So, if you think you have it takes and want to win this once-of-a-lifetime opportunity and the chance to collaborate with Sasha here’s what you need to do:

When you are ready, upload your remix in mp3 format to burn-studios.com, but remember if you don’t have a burn studios profile you will have to create one first. Make sure to tag your entry with this: sasharmx

Share the track URL with friends on social networking sites, Sasha will select the fourteen lucky contestants for the second round, but having a lot of likes and comments might help you to shine out from the rest of the entries! The fourteen contestants who will fly to Ibiza will be announced on 14th July on the burn studios website.

The fourteen contestants who will fly to Ibiza will be announced on 14th July on the burn studios website. Please read the Terms & Conditions before you enter the contest. Good luck!

For more information go to www.burn-studios.com