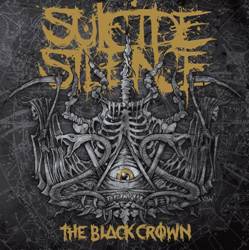 SUICIDE SILENCE, the Riverside CA, natives, since arriving on the scene in 2005 immediately caught the attention of the fans and media & became a five-piece force of destruction, bludgeoning fans across the world with the strength of their two full length records ‘The Cleansing’ and 2009’s ‘No Time To Bleed’

SUICIDE SILENCE again teamed up with heavyweight producer Steve Evetts (Dillinger Escape Plan, Architects, Every Time I Die, Hatebreed) to create their most substantial piece of work to date which includes guest vocals from Korn’s Jonathan Davies. This summer “The Black Crown” aims to redefine heavy and confirm the band’s outstanding position within the extreme metal community. The band have already landed the cover of Revolver Magazine in the US, been named one of the ‘100 Bands You Need To Know’ by Alternative Press and shifted nearly 200,000 records in a time where critics claim the music industry is dead. Furthermore, the band charted with its 2009 album “No Time To Bleed” on a phenomenal position #32 of the US Billboard Top 200.

After two highly acclaimed studio albums and countless laps around the globe alongside the likes of Slipknot, Slayer, Megadeth, As I Lay Dying and as part of some of the biggest festivals here and in the US – Vans Warped Tour, the Rockstar Mayhem Festival, Music as a Weapon IV and much more, SUICIDE SILENCE has proven itself to be a leading act in modern metal. Now, the juggernaut returns with its third-full length, which looks to push the extreme metal genre even further into the scope of music fans everywhere. Apart from such devastating tracks as “Fuck Everything”, “Human Violence” or the catchy 1st single and video track “You Only Live Once”, the band feels honored by guest vocals of Jonathan Davis on “Witness The Addiction”, a collaboration that underlines the fact that SUICIDE SILENCE ignore any kind of pigeonhole thinking and defy all stylistic boundaries making them equally attractive for death metal freaks, hardcore kids and whoever likes it loud!

THE JASMINE MINKS …return to the stage!