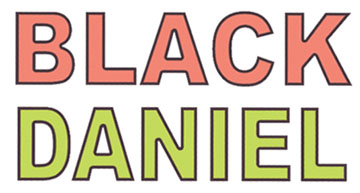 Black Daniel are back with a rushing psychedelic song with all the charm and energy that we’ve been craving since there killer second album ‘Lets Get Sued’. New single Mobile Phones is out on the 4th July and is accompanied by an Acid House carnival remix of the track from Medicine 8. Mobile Phones is the first release from their upcoming third album due out later this year on Trashmouth Records.

Black Daniel is made up of two brothers, Liam and Luke met Craig on the dancefloor of a lower east side disco, they quickly discovered a mutual love of animal tranquilizers and long walks in the rain and within a year a new album was born.

The first two singles they released ‘Chelsea Teardrops’ and ‘Say Hello’ had alternative radio all over them (Lauren Laverne sessions, Colin Murray’s Record of the Week, XFM plays etc), the likes of NME and Time Out were bigging them up at press,

London’s most exciting party band is a title that fits the threesome to a tee who’s unpredictable gigs end up more often than not in Japanese stage invasions, cow bell solos, bloodied microphones, blow up dolls, leather pant experiments, nymphs and general good times all the way.
Black Daniel’s DIY work ethic extends to how they promote their releases. Earlier last summer, they released double A-side ‘Here Comes Caeser/I Love You..’, which they marked with a week of last minute, impromptu gigs in Soho including a 5 night residency in a strip joint, guerilla street gigs and a Black Daniel sound system (OK, them walking around with a boombox, terrorizing Soho).

The lead up to the release of long awaited single ‘Mobile phones’ will be filled with similarly unique ways of spreading the Black Daniel love.