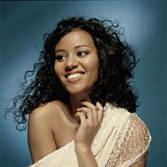 In 2007, a young singer burst onto the scene with her debut album, and soon became one of the most talked about and highly acclaimed artists of the year. At 23 years of age, she scooped the Newcomer award at the 2008 BBC Radio 3 Awards for World Music, and was heralded the new young diva to champion Cape Verdant music.

Since then, Cape Verdean singer Mayra Andrade’s reputation a consummate live performer has seen her grace huge internationals stages, so not only do these two special shows mark her debut at Ronnie Scott’s but provide a rare opportunity to see her in such an intimate setting.

Andrade is arguably the front-runner of the many talents that have emerged from Cape Verde in recent years. She will be performing material from her latest album Studio 105, out now on Sterns.

‘Andrade effortlessly blends the morna tradition with elements of samba and a soupçon of francophone romance’. The Times

LETTERS RELEASE NEW SINGLE ‘FLASH!LIGHTS’ ON THE 4TH OF JULY.