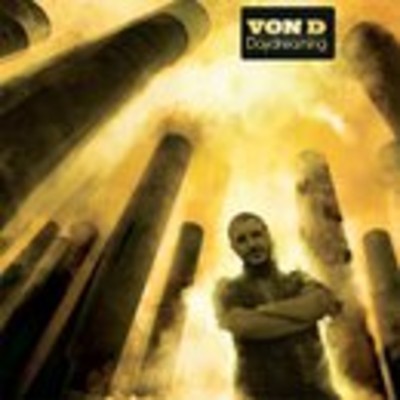 Ah, dubstep, the demon dog of my life. However, calling upon the recent potential exam topic of “is objective knowledge possible?” we’ll approach Von D’s 5-track sampler for his new LP, ‘Daydreaming’, with minds and hearts as open as a barn door.

The first track is a sprightly kicker for dubstep, featuring a synthesised handclap and multifaceted vocals that stretch the track in terms of texture and attention. However, the synths feel lacking in depth – not nearly enough bass, and the result, while pulsating and gritty, lacks depth to fully satisfy. That, and the lyrics are personally not what I’m happy with, but their delivery, with quick bratty rapping and a slow barking call, does lift the content somewhat.

Track two oozes cool in its clattering, brittle percussion and smooth, icy synths that recall house at its best. Texturally, this track holds enough “wub” to reach the bass centres, as well as the shimmering treble to give the non-subsonic areas a tickle. Laid-back, and smooth yet scuzzily modern, this feels like a con film delivered via aural IV, framed, indeed, by daydream softness. Following this, is a surreal, discordant mix of longue style percussion, dancefloor beats, the world’s most plinky piano playing a somehow satisfying series of mismatched notes, and some softly off-key female vocals croon like velvet over the whole affair. Parts of me, through bloody-minded perversity, is drawn to the strangeness of the affair, but the rest of me feels reminded of the godawful smugness that permeates Mark Ronson’s work, and unfortunately seems equally dyed into the fabric of Von D.

Number four, and we’re tripping out on the lush urbane atmosphere of the previous track, mixed with the essence of the layman’s understanding of dubstep: soft, digitally processed female vocals repeating a plain ol’ “love” song refrain while all the electronics ping, clatter, and throb in the background. Well-constructed, yes, and doubtless with more immediate appeal that its predecessors, but it suffers for that by feeling a little… samey.

The final track jazzes it up a little, and adds some modern R&B swing appeal while we’re at it, but once again, it feels too smug and plastic to fully bloom, caught up in saccharine balladry, in its own way. Tinkling music box style melody plays alongside dreamy synths and a gentle bassline, and there’s a spark in the use of electro-brass hybrid noises, but it really cannot be fully saved from the throwaway addition of a pointless slow-song.

So there you have it: Von D is at times purveying a definitely intriguing and rather appealing mix of sounds that touch upon a plane beyond the sum of their parts, but I can’t help but feel offput by its overly-lubricated complacency. Although the hymns are being sung well enough, as of yet the simple lack of a flame has meant that the church of house and dubstep has not found a new convert. If you like cool jazzy experiments in electronics, this’ll be up your street. Otherwise, look elsewhere for kicks. Fifteen tracks of this would by no means hold me, I’m afraid.