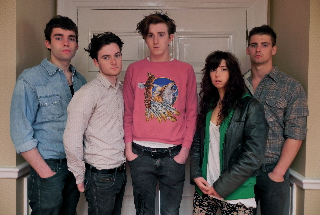 As calling cards go, ‘The John Wayne’ is an impressive introduction to a band with an arsenal of ideas and sounds bubbling under the surface. Produced by David Kosten (Everything Everything, The Guillemots and Bat for Lashes), ‘The John Wayne’ is a rhapsodic love song dedicated to both a beautiful American teen and a makeshift Drum Kit. After a failed attempt to gain entry to a nightclub and win the affection of his American dream, Stevie returned home to make a song about it. Sound restrictions in his building meant drums were out, so he recreated a kit out of cups, pans and decided to call the masterpiece “The John Wayne”.

The multi-voiced, elemental chorus is layered like the Mamas and the Papas singing for their lives, and gives the impression of a young band wonderfully uninterested in the latest zeitgeist sounds.

B-Side ‘Glass Case’ further highlights the bands skill for crafting challenging and intricate compositions, as it threads together minimal guitar lines with complex percussion and the urgent, impassioned vocals of blue eyed youth.

Already accomplished painters, film makers, artists, illustrators and published writers, Little Green Cars have dedicated the last three years to writing, recording and producing music. This is not a band short of ideas and invention; Little Green Cars have at least 200 songs already finished along with hundreds of DIY videos.

Little Green Cars’ blend of eccentricity and accessibility is a sound of uncommon and uncharted depth.