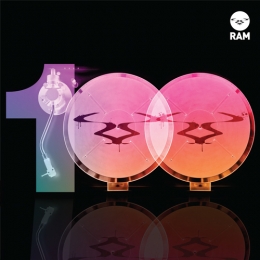 Ram is 100! Yes, you read that right. While most people who reach the grand old age of 100 are happily sucking on Werther’s Originals with a telegram from The Queen sat on the mantelpiece, Ram Records is still in the business of smashing up big room dance floors with rib-rattling basslines and jaw dropping sonic artistry.

Founded in 1992 with the release of Andy C’s ‘Sour Mash’ EP, Ram has continually led the way releasing the biggest, the best and the most memorable drum & bass classics. In that time Ram Records has amassed hordes of fans from across the globe, while label head Andy C has consistently been cited as one of the
most incredible DJs to ever touch a turntable thanks to his effortless and frighteningly fast mixing skills.

To celebrate their 100th release, Ram are offering something rather special to their loyal followers; the chance to get their hands on four tracks that have been rinsed in raves for more than half a decade, but have never previously been available to buy.

Sub Focus’ ‘Stomp’ has had more dance floors jumping than most ravers have had hot dinners since Andy C started dropping it over two years ago. Internet message boards have been ablaze since as eager fans digitally waxed lyrical about its crisp beats, booming bass and cheeky vocal sample.

Taken from ‘Nightlife 4’, ‘Machine’ by Culture Shock is a grinding, futuristic slice of electro-driven D&B that’s been top of people’s wishlists since 2008. Even now, three years later, this heavyweight track sounds as relevant as it did then and is a welcome addition to Ram’s vinyl catalogue.

The C side is Andy C’s side as ‘Finders Keepers’ finally gets an official release. Anyone who hung around Ram’s label nights at The End or has a copy of ‘Nightlife 3’ stashed somewhere will surely remember this one and its infectious lead riff.

Finally Noisia’s 2007 take on Ram Trilogy’s classic ‘No Reality’ rounds off this EP in fine style. Easily one of the most requested Ram tracks that never made it to release, this will undoubtedly have the forums firing on all cylinders in anticipation.