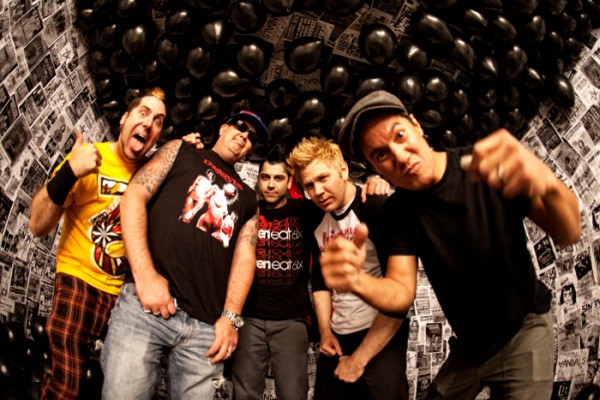 One-off date at the Garage in London on 8th August

The La Habra, CA-based punk inspired rock outfit zebrahead was formed in the mist of the Orange County punk explosion and since their incarnation they have had highs and lows, sold over 1.5 million albums to date, survived label changes, garnered a Grammy nomination and toured nonstop. Fueled by pure determination and a lot of beer the band is still going strong.

The band are gearing up to once again bring the unique fun-filled zebrahead sound to the masses with the upcoming worldwide release of Get Nice! produced by Jason Freese (Jewel, Death by Stereo and plays with veteran outfit Green Day) and mixed by Andy Carpenter (Dwarves). This new album is set for release in the UK on 27th August. This will be preceded by a one-off UK date at London’s Garage on Monday 8th August. Tickets available at www.ticketweb.co.uk.

We have been working on the Get Nice! album for a year and a half. We wrote and recorded the entire album in our own studio and that is a first for us. We made a conscious effort to push ourselves into new directions with these songs. There are definitely some zebrahead staples on the album, but we also have songs that we play with tempo and song structure. Usually most of us have a couple of songs that the entire band agrees are our favorites but I think on this album, we all have different songs that we really like. I think it’s a more diverse album and it has something for everyone. We are really excited to see our fan’s reactions to the Get Nice! and are planning on touring to support it for the next couple of years. We are going to Europe, Japan, and for the first time Australia starting in the end of July. I think this album will definitely win a Nobel Peace Prize, get you a raise, and get your girlfriend pregnant all at the same time. It’s that good!

It all started with the release of the EP Yellow on the indie label Dr. Dream in May 1998, the buzz began and zebrahead signed to major label Columbia to release their full-length debut, Waste of Mind, which appeared later that same year. Playmate of the Year was issued in mid-2000 to rave reviews, the album’s infectious title track received over 4000 spins on Modern Rock and Rock radio, garnering airplay on some of the nation’s biggest alternative stations. Stupid Fat Americans EPfollowed only in Japan the next year. Then came the 2003 release of zebrahead’s critically acclaimed MFZB.  MFZB had the highest testing alternative song for months running with “Rescue Me” and also went gold in Japan!  The band spent the summer of 2006 on the Vans Warped Tour as Broadcast to the World was released overseas that July through SPV/Sony. The album went gold in Japan in just a month’s time, and the guys spent fall on dates throughout Europe.  In 2008 the band released Phoenix and Absolute Punk warned “listen with caution as your face may melt right off of your head”. In 2009 the band released Panty Raid, hands down one of the most fun and random cover albums to grace punk music to date.

Get ready to Get Nice!.