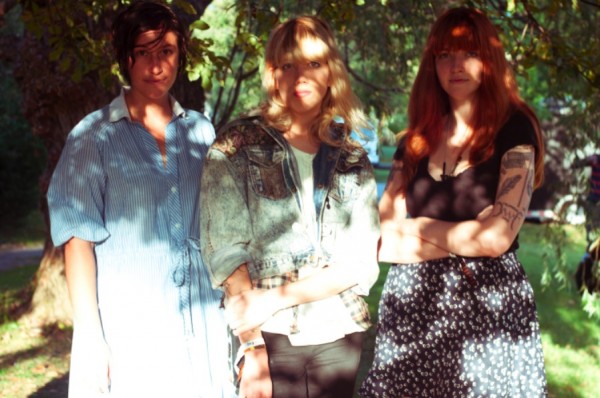 “Vivian’s third is armed and dangerous… Time to surrender….” Mojo

“comes with a sparkling new pop sensibility, a more defined narrative and a refined sound to boot.”Drowned in Sound

“A snapshopt of a good band expanding their chops.” NME

Brooklyn trio Vivian Girls have released a free mp3 ‘Take It As It Comes’ ahead of their imminent UK tour in July.

Taken from their latest album ‘Share The Joy’, available now on Polyvinyl Records, download ‘Take It As It Comes’ here:

Vivian Girls – Take It As It Comes by Polyvinyl Records

The UK tour starts in Brighton on the 16th July, culminating in a show at London’s XOYO. Here are the full dates:

On their third album (and Polyvinyl debut) ‘Share The Joy’, Vivian Girls continue to sharpen and refine their transcendent mix of garage thrash, girl-group warmth and infectious pop hooksmanship. The trio’s vibrant blend of guitar noise and melodic sweetness has already made Vivian Girls one of America’s most celebrated and influential young bands, and has helped to spark a wave of similarly-inclined female-fronted acts who’ve followed in their wake.

‘Share The Joy’ was recorded during 2010 at Rear House, the home studio run by Jarvis Taveniere of the Brooklyn combo Woods, who engineered the album. The ten-track record finds the trio –guitarist/vocalist Cassie Ramone, bassist/vocalist Kickball Katy and new drummer Fiona Campbell– continuing to evolve and expand, building on the D.I.Y. achievements of their 2008 debut Vivian Girls and its 2009 follow-up ‘Everything Goes Wrong’ while delivering their most memorable songs and most focused performances yet. Their new tunes successfully venture into challenging new musical and lyrical territory, reflecting the band members’ developing instrumental rapport and their far-reaching musical influences, while retaining the raw immediacy that originally endeared the group to its fans.

“It’s cleaner and more hi-fi than the previous records,” Cassie says of the album recording. “The sound is more open, more free. I think that this album really shows our strengths as musicians, and shows us melding together musically. It’s more psychedelic and less shoegaze. There’s also a lot of organ on it, which is new for us.”

‘Share The Joy’’s musical and emotional depth is reflected on ‘The Other Girls’ and ‘Light In Your Eyes’, each of which clocks in at over six minutes. The former tune manages to encompass hammering hardcore, Beach Boys-esque melodic bliss, Neil Young/Nirvana-inflected guitar frenzy and ethereal harmonic drone, while the latter closes the album on a triumphant note of surging sonic uplift. Elsewhere, ‘Dance If You Wanna’ and ‘Take it As It Comes’ rank with the band’s most intoxicating pop confections, while ‘Lake House’ and ’Vanishing of Time’ maintain a thoughtful, introspective tone that may come as a surprise to those who’d had Vivian Girls pegged as a lo-fi garage outfit.

The new songs openhearted diversity justifies ‘Share The Joy’’s unironic title. Cassie borrowed it from a tune by Burt Bacharach, one of her biggest songwriting influences, which appeared on Bacharach and Hal David’s ill-fated ’70s musical version of ‘Lost Horizon’. “I was reading a book about him and I noticed the title ‘Share The Joy,’ and the blurb about the song said that it had ‘one of his most haunting melodies,’ Cassie explains. “I immediately thought that was so interesting-a deeply haunting song called ‘Share The Joy.’ I hunted the song down and listened to it and totally fell in love.

‘Share The Joy’ has the most diverse batch of songs of any of our albums,” Cassie observes. “I feel like these songs are more expansive; a lot of the themes and lyrics are less direct than other albums. These songs focus a lot on the themes of alienation, reconciliation, identity, and trying to figure out what really matters in life. It’s a dark album, but unlike our first two albums, it has a happy ending.

“Our music continues to get more and more defined and developed, but it’s never going to be completely polished,” Cassie asserts, adding, “A thing I like about our band is that we seem to mean different things to different people. Another thing I’m proud of is that, while a lot of people may have initially heard about us through internet buzz and things like that, I think our audience likes our music because it’s honest and because we mean it. I think that people can pick up on that.”