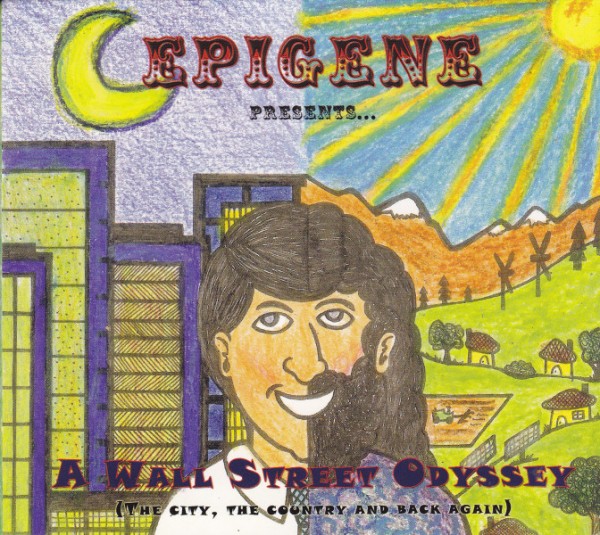 Upstate NY band Epigene announce the release of their 3rd album, a brilliant new rock opera called “A Wall Street Odyssey; The City, The Country And Back Again.” Inspired by such landmark albums as The Who’s Quadrophenia, The Kinks Preservation Act and Green Day’s American Idiot, A Wall Street Odyssey is a hero’s journey for the 21st century.

The hero, is named “Yossarian” and is inspired by the main character in Joseph Keller’s seminal book Catch 22.  Yossarian starts off as an overworked investment banker who suffers an existential crisis in his work and lifestyle.  He turns to drugs and becomes homeless on the streets in an effort to escape society and his identity.  He is later reborn living in a country eco-village where he bonds with nature and connects with a deeper, earthly spiritual presence.  Finally, as shaman and prophet, he returns to the city to preach a return to nature and escape from creeping government tyranny.

“In the grand tradition of the English Rock opera, a la S.F. Sorrow, Tommy, Preservation Act, Quadrophenia and The Lamb Lies Down on Broadway, Epigene presents a new rock opera for the 21st century: A Wall Street Odyssey. The story is a hero’s journey that also reflects on the profound social, political and economic events currently shaping the American landscape. Specifically, it is a commentary on Wall Street and it’s corrupting effects on the individual, the resurging ‘back to the land’ movement and the growing unrest & distrust of the government in this post 9/11 era. The 25 songs are packed with exceptionally strong melodies and show an influence of UK styles including prog, psychedelic folk, electro-pop and new wave. Listeners looking for adventurous songwriting with a taste for the dramatic would do well to give A Wall Street Odyssey a spin. The album comes packaged as a 2cd, 95 page hard-bound book containing a graphic novel, lyrics, photos and plot essay.”