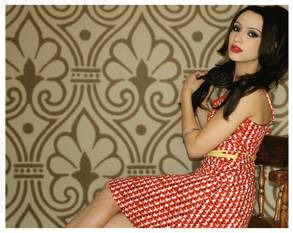 Hand-picked by Brandon Flowers for her pitch perfect voice to join him on his tour as his lead back up vocalist, Lindi Ortega is now stepping foot forward into the limelight to showcase her distinctive blend of America and alt-country folk.

“What’s a girl supposed to do, when the bitter truth turns into a sweeter lie?” intones Lindi Ortega, with more than just an impish twinkle in her eye. Still managing to retain an air of innocence despite this heartbreaking admission, Lindi Ortega’s cherry pie vocals are seductively wanting – enough to send you wild with desire.

The diminutive singer-songwriter can really hit those high notes and has already been likened to Dolly Parton, Emmylou Harris and Johnny Cash. Written by Lindi Ortega and produced by Ron Lopata, ‘Little Lie’ is backed by the reverberating pluck of a double bass and the resounding shriek of an electric guitar.

Alt-country’s newest sweetheart will imminently play a string of UK festival appearances as part of the Brandon Flowers band and will return to the UK in September for a solo tour.