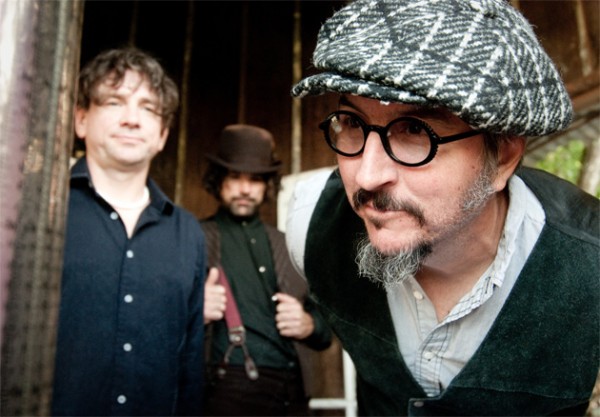 LIVE SHOWS THIS MONTH AT:

ATO Records and Prawn Songs are excited to announce that Primus will be releasing its first studio album in 11 years on September 12, 2011. Titled Green Naugahyde, the record was produced and engineered by Les Claypool in his personal studio, Rancho Relaxo, in Northern California, and features Claypool, long-time guitarist Larry LaLonde and drummer Jay Lane. Lane was in an early lineup of the band, and was also in Sausage, a 1994 reunion of the 1988 Primus lineup. Green Naugahyde expands on Primus’ incomparable sound and also sees them bringing it into the next millennium. It is a cerebral and complex album that, like all of the band’s output, is teeming with the band’s signature blend of whimsy and underlying darkness.

Says Claypool, “If I were to look at all of our records, it seems like this is reminiscent of the early stuff. Obviously, with Jay there’s a newness to it, but because he left the band right before we recorded our first record, his approach has an eerie harkening to the old Frizzle Fry days.”

Like Primus’ early output before they were international superstars, there was no earth-shattering catalyst behind Green Naugahyde other than the fact that all three of these musicians—and life-long collaborators who have worked together in various contexts—were getting the itch to experiment again. “There wasn’t a lot of pre-thought to this as much as, ‘Oh here we are, we should make a record,’” explains Claypool. “I’ve been playing with Jay quite a lot over the past 10 years and we have an intuitive bond, so for me he was a natural choice to be back in the mix,” Claypool continues when asked how Lane came about rejoining the band after nearly two decades apart.

Claypool and LaLonde concur that Lane injected the band with a new energy that’s evident in every note of Green Naugahyde. “We recorded this album in the same way we always do but having Jay there made this a whole different experience,“ explains LaLonde. “It definitely made it more collaborative and it made us excited about the album as we went along because we had so much fun in the process.”

For the past 27 years, Primus have followed in the footsteps of boundary-pushing artists like Frank Zappa and Pink Floyd to create some of the most original and inventive music in existence. Green Naugahyde is a Primus record with all of the magic and mystery that phrase entails—and while no one can say for sure what the future will hold in store for the band, the most important thing is that the album exists and will inevitably hold its own in the band’s impressive cannon of music.

“Even back in the old days people would always ask me, ‘How long is Primus going to go on’ and I would always say ‘It’s going to go until it’s not fun anymore’ and at the end of the day it just wasn’t fun anymore so we stopped,” Claypool explains. “I think giving it this much time to sit and ferment or whatever the hell you want to call it has made it fun again,” he summarizes with a laugh.