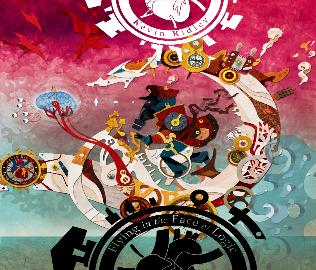 Flying Face Of Logic – is a nice introductory song that has the feel of a demo which is worm and pleasant for the start of the album.

Eat The Sun – starts of with a powerful stadium drums sound intro. Then a violin has that authentic Irish sound. The vocals fit in well to completes the sound with a guitar riff that fits in well. Overall it’s a good rock tune that kiss of an incredible album. When I think of Irish hard rock music this comes to mind.

Angel At Harlow Green – starts of as a ballad and is nice the change from the previous hard rock tune. It still had that Irish influence. The vocals fit in well and the lyrics are also really touching which I really like. The violin makes the listener more touched a bigger connection is felt with the lyrics.

De Prufundis – the mandolin takes the listener into a different dimension. The song adds some more depth to an incredible album. The vocals are really powerful and this song is a really strong ballad. It makes me think about life. The true Irish sound is kept in this song, which is really nice. Over all I like that its different to “Angel At Harlow Green”

The Linton Flyer – the into starts with a nice organ sound, which is different. It makes me want to go to the beachside. The tunes is acuminated with a nice acoustic guitar. It’s a nice instrumental song.

Good Intentions (A Young Man’s Tale) – the song starts of with a nice flute, and then the vocal effects sound like “The Killers”. Then the familiar Hard Rock sound is back, with a mix of ballad sound. Which sounds a bit even like “Kansas”. The Irish sound is kept.

Point of Departure – this song starts of with a more chill out effects. It’s a nice ballad that sounds like “The Killers”, due to the vocal effects and the acoustic guitar. This is really a strong song. The lyrics are touching, because of a change is happening to the listener. The bridge makes it a nice dimension in the song and still with the Irish violin influence.

Still Lucid After All These Beers – this starts out with a nice beat change to “We All Get Where We Want To Go”. Its still a hard rock/ Ballad, with the classic Irish influence. The Bass guitar is what grabs the listeners attention and makes him dance. It’s a nice change to an incredible song/album.

Which is Why –  starts of with a nice bongo intro. Then the song goes into full swing with an acoustic guitar. The powerful voice grabs the listener in. The violin accompanist the lyrics perfectly and the solo is nice as well.

Knotwork – this song is really nice with the finger style acoustic guitar intro. The lyrics are really powerful and grab the listener into a journey that is about how life is hard for some people. It really touches me and the song is different that the previous ones.

They Dance Till Tomorrow – the song has a nice intro with a nice melodic scale with a mandolin. Then the hard rock influence comes back. The chorus is nice, because it gives the music some nice new depth. I this is the best song with different thinks happening in it. The vocal duplicate effect used is nice. The guitar solo is nice and of course the classic Irish sound is kept with the violin. I like it for it different layers it has.

Lost For Words – this song starts out with a nice acoustic guitar that is accompanied with a some nice drums. This song is a nice ballad, which adds some nice depth to the album. The vocals are fitting in well together. Then there is a nice flute that comes in the song that is nice. It doesn’t have the Irish influence, but it ads a different angel to the album that has been seen before.

Flying Face Of Logic part 2 – this is a nice outro to an incredible album its really Irish at times it has some nice ballads to dance to. This song is a demo and not more but it makes the album feel like it’s a whole product than just songs mashed together.