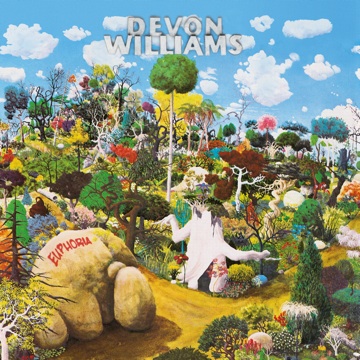 DEVON WILLIAMS // Your Sympathy by TheArtOf…

Devon Williams performs a shimmering pop music that tempers sweetness and bliss with an honest, unguarded perspective. Williams’ music is informed by his broad musical knowledge and diverse tastes; while the past echoes through his tunes, his song-writing skills, strong musical voice and arrangement/production prowess mark him as a truly unique talent on the scene. The past can be a window on the present, and Williams’ distinctive blend of power-pop, orchestrated soft-rock, folk-rock and lush, layered jangle-pop takes full flight on Euphoria, his new album.
Euphoria presents an homage to things romantic and rare. A powerful and catchy set of songs matched with a more intricate and layered production than his 2008 debut solo album Carefree, Euphoria retains a uniform feel though it was recorded and mixed in several studios by producers like NYC’s Jorge Elbrecht (from the excellent Violens) and Vancouver’s Dave Carswell, who also produced Williams’ onetime touring mate, Destroyer. From the gushing crescendo of “Slight Pain” to the trance-like state of “Dreaming,” the album’s vast emotional landscape embodies the tough-minded/tender-hearted spirit that animates Williams’ live performances. The 12 songs on Euphoria live in a dizzy head space of quiet desperation, progressing from the loving and warm “Revelations” to complacency in “Sufferer,” then back to the optimistic “Right Direction” directly into the claustrophobic, pounding chorus of “How is There Always Room?”
Lush and layered, Williams chooses this colorful world to make light of dark thoughts. First single “Your Sympathy” is a perfect illustration – a gorgeous, rolling jangle-infused tune that wraps romantic resignation in the stateliest of melodies. Songs like “Favor Tree” and “All My Living Goes To You” continue with this theme, heady meditations on the heart set against lovely musical backings that would make any fan of Felt or The Church swoon. This is Williams’ statement of musical intent and he’s been carefully crafting and tweaking the songs for maximum effect, building them up and then paring them back down to find the ideal balance of immediacy and depth, of melodic richness and lyrical concision. Euphoria is Williams’ finest record yet, a very personal work of great beauty that is as thought-provoking as it is musically intoxicating.