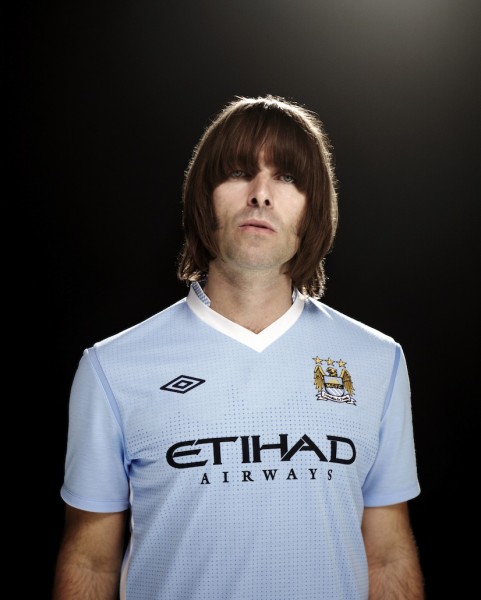 MANCHESTER, ENGLAND (15th July 2011) As Manchester City Football Club look ahead to an exciting new season, Umbro have revealed the new 2011/2012 Home shirt which captures the passion of the fans in a unique way.

The new Home shirt, which is tailored by Umbro, features a soundwave graphic of fans singing the team’s famous anthem, ‘Blue Moon’, which is subtly embedded within the shirt.

To help launch the shirt, Umbro teamed up with Beady Eye, fronted by famous City fan Liam Gallagher, who have recorded a special version of Blue Moon which mixes into their new single, The Beat Goes On.

Liam Gallagher said:  “I’ve been a City fan since I was a kid so to be involved with the launch of a new kit is colossal. Manchester City fans are known for having a lot of style and the new shirt looks mega. I love the soundwave idea and the Mod-inspired collar looks proper smart.

“Blue Moon is a top tune and has been City’s song for as long as I can remember. It’s been covered by loads of people but the only good one until now was the one Elvis did. I hope the fans buzz off our version and sing along to it at the stadium.”

Blue Moon is well known as the Manchester City fans’ signature song however the new Home shirt captures it in a unique way.

David Blanch, Senior Designer at Umbro, commented: “You can go anywhere in the world and people will know two things about Manchester: football and music. For the new Manchester City Home shirt, we wanted to combine the elements of football and sound in a new and original way.

“Our starting point was the club’s anthem, Blue Moon. When fans are singing Blue Moon, it becomes more than just a song – it’s a connection between the fans and the players. We went into the Stadium to record a section of the fans singing the song. From this recording, we extracted a 19 second clip and created a soundwave graphic which is used within the shirt. One of the most powerful ways in which any fan can positively influence a football match is through sound. We’ve harnessed that and made it part of the Manchester City’s home kit. This is a truly innovative football strip.“

The soundwave graphic runs across the heart of the shirt but does not interfere with the club crest. The raven [dark navy] colouration around the crest is to give it a strong visual identity.

The neckline is a combination of a bold white V neck with an inner chequerboard collar stand. The inspiration was taken from the from white V shirt worn in the League cup winning season in 1976 and the classic, smart style of Mod polo shirts. The same blue and white chequered board pattern can also be seen on MCFC flags all around the Etihad Stadium on match days.

Comfort is another important factor in the design of the new kit. The construction was inspired by tailored dress shirts, but using innovative technical fabrics. The seams around the sleeves and across the back yoke (shoulder) areas are inserted with high performance stretchable mesh, with the holes in the fabric opening up in response to movement to let the wearer’s skin breathe. The mesh is also carried onto the side of the shirt through panels that show the traditional white colour when celebrating a goal.

The new Home strip features blue shorts with white side panels that visually connect with the shirt, to create a dominance of the famous City vista blue. The socks feature a special anatomical footbed and feature bold blue and white hoops, a pattern which has seen City through some of the most successful periods of their history.

Trevor Cairns, Chief Marketing Officer for Umbro, added: “‘Blue Moon’ is the connection between Manchester City fans and the players. Hearing the song – whether it’s before, during or after games – is an inspiration to the City players. We wanted to celebrate this relationship by capturing the song within the shirt. This is the first time that fans have been featured within a football shirt in this way. We hope both the players as well as the fans are proud to wear it.”

Chief Brand and Commercial Officer for Manchester City, Ian Cafferky, said: “Manchester City Football Club has always connected well with fashion and music.  This special relationship has spanned decades and helped shape Manchester’s rich cultural landscape. Blue Moon is part of City’s DNA.  Liam covering the song is a fitting tribute to both the Club and the fans.  As a true blue himself, it is great to have him as the first fan to wear the new home kit. We look forward to playing it next season in the stadium.”

The new 2011/2012 Manchester City home kit is available for pre-order now and will be on sale from 22nd July, visit www.umbro.com.

The video for Beady Eye’s version of Blue Moon / The Beat Goes On is available to view on umbro.com

Beady Eye’s new single, The Beat Goes On, is available from 18th July. The track is taken from the album, ‘Different Gear Still Speeding’ which is out now.

A Chat With Baron Bane!!