Deeds Of The Nameless – Exit Wound 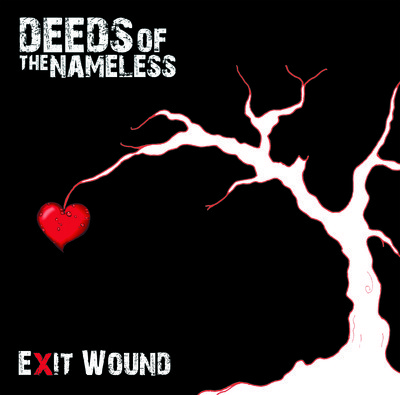 With a creeping psychedelia laced into a heavy rock mass, Deeds Of The Nameless bring us back to the era of when heavy metal dabbled in places other than the meedly-meedly guitar solos. ‘Exit Wound’ is an attention-grabber from the word go, as it blend Sabbath-style distorted growl with impassioned Cobian style vocals and an eerily classic pop rock 60s melodicism, pitching snarl and shine together in a malevolent yet hooky combination. The chorus is the ghost of a college radio hit from the 90s, the bridge from Iron Maiden, and the whole affair feels like a psycho-trip down a nightmare version of the 1960s as it loops, starting and ending with a brittle, paranoid riff that mutates via a heavy rock out that sends chills down the spine, a sparse and plaintive yet bitter verse and an addictive chorus.

B-side ‘Run This Town’ is by far the more energetic, the tempo thundering away with finesse. And yes, this is a Jay-Z cover by a rock band, and it’s beyond all recognition, only the barest trace of urban hip-hop present in its sneering attitude and slight dancey lope in the rhythm, but otherwise it’s been filtered via Stone Temple Pilots into a pared-down, distortion heavy guitar track with heavy metal power. As a weird mirror act, the third track is a rap/hip-hop rework of ‘Exit Wound’, with a rap vocal that drips attitude, the anger pulling it together into coherence with the polar-opposite grungey guitars and chorus, but the effect can’t quite hold between the emotive 60s rock chorus, only the heavier sections.

The act of blending rap and rock is controversial, but Deeds Of The Nameless have done better than most here. Ultimately it wouldn’t bode as a whole career, but works as a way of displaying clear versatility and spark, and the more conventional fare that makes up the main bulk of the release is a treat to the ears of anyone looking for moody, heavy grunge-inspired material that pushes the envelope away from tiring Nirvana copyists into the realm of something with a recognisable sheen of originality.