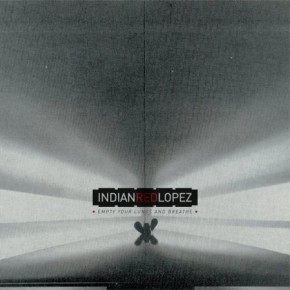 Indian Red Lopez comes out with their debut album: Empty Your Lungs and Breathe.

Here I am, listening to it and trying to capture the sound of it all.

The album is structured in 11 tracks, all of them reminding me an Helen Stellar’s song called IO (This Time Around), for its dreaming, (kind of flat), atmosphere.

The problem at the base of it all, is the fact that there isn’t a change in dinamics, rhytms (and Scales as well), in every single song, as if they are all part of the same track. I really was captured by The New Black’s piano, but then it all became something already heard. The same thing happened with Strope Lights, whose guitar and voice gave me the sensation of an endless breathing in and out process, but then again there wasn’t a valuable increase.

I’ve liked the beginning of all the songs, they all start in a very striking way and it seems like there’s something inside those notes, (because it is a great sound, I have nothing to say about that, they are excellent musicians for sure), and you’d like to listen his evolution but then it all ends up with a flat voice singing the same melodic line that ruins quite everything.

I think they’ll have other chances to demonstrate their talent, though it is quite evident but abandoned in the research of a characteristic sound; they just have to grow and improve their music, trying to make it more eclectic and sort of multifaceded.