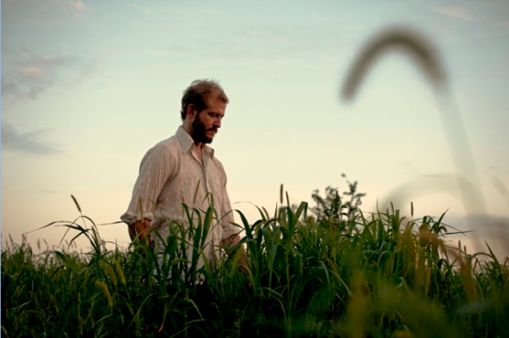 Bon Iver‘s second album Bon Iver released on 4AD in June debuted at #4 in the UK Album Charts. It also reached the heady heights of #2 in the US c/o Jagjaguwar.

Following the remarkable elevation in his worldwide profile, Bon Iver will release the wonderful second single ‘Holocene’ on 5th September, following the success of ‘Calgary’. Not only did that single herald the new sound for the artist but also included an exclusive cover of Bonnie Raitt‘s ‘I Can’t Make You Love Me’ which has taken on a life of its own. So notorious in fact that Adele chose to cover it at her recent Roundhouse show too (she declared herself a fan of the band here –www.adele.tv/blog/325/bon-iver). His lovely rendition can be heard here (www.thedailyswarm.com/headlines/watch-justin-vernon-performing-i-cant-make-you-love-me-nick-time-studio).
The B-side to ‘Holocene’ is another cover in the shape of Peter Gabriel‘s ‘Come Talk To Me’ that was initially released as a super limited run for Record Store Day last year.
For his upcoming tour in October, Justin Vernon will perform with an 8-piece band that includes many musicians who contributed to the Bon Iver release. The touring band will consist of regular Bon Iver contributors Sean Carey (drums, piano), Mike Noyce (guitar) and Matt McCaughan (drums), as well as Rob Moose on violin and guitar (Antony and the Johnsons, The National), Mike Lewis on bass (Andrew Bird, Happy Apple), and a horn section including Reginald Pace, Colin Stetson (Tom Waits, Arcade Fire) and C.J. Camerieri (Rufus Wainwright, Sufjan Stevens). Please note all UK dates are sold out.
Bon Iver Tour Dates:
19 October – Manchester Apollo (www.o2apollomanchester.co.uk) SOLD OUT
22 October – Edinburgh Usher Hall (www.usherhall.co.uk) SOLD OUT
23/24 October – London Hammersmith Apollo (www.livenation.co.uk) SOLD OUT
9 November – Birmingham O2 Academy (www.livenation.co.uk) SOLD OUT
10 November – Leeds O2 Academy (www.o2academyleeds.co.uk) SOLD OUT
11 November – Bristol Colston Hall (www.colstonhall.org) SOLD OUT
Praise for Bon Iver:
‘Album of the Month.’ 4/5 MOJO
“Bon Iver possesses all of the austere beauty and understated emotiveness of its predecessor.” 5/5 Uncut
“In purely musical terms, Justin Vernon may just be the most important figure in popular music right now.” 5/5 The Independent
“Bon Iver remains rooted in the emotional sincerity that made Vernon’s debut so mesmerising.” 5/5 The Guardian
“Our love intensifies.” 5/5 Time Out
“If his last album struck a chord, this one strikes dozens.” 5/5 Evening Standard
‘Album of the Week’ 5/5 (Album of the Week) The Sunday Times
“Bon Iver is nothing short of hypnotic.” 5/5 Sunday Express
“One of the defining vocalists of our times.” 4/5 (Album of the Week) Daily Telegraph
“He’s out of the woods, and the view is beautiful.” 4/5 Q
Share on Facebook Tweet This Share on Google Plus Pin This Email This