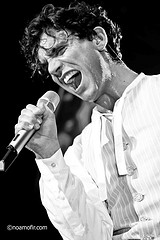 Brit Award winner Mika was flying high over the White Isle this weekend, but it was no ‘dodgy holiday’. Mika took to the skies in a hot air balloon high above Ibiza to talk to MTV, prior to his ‘ I Want My MTV Ibiza’ gig at Amnesia on Friday night in what he says was; “The most surreal interview of my entire life”. The pop prince and his crew of performers later donned colourful Renaissance outfits and took to the stage at the legendary club Amnesia for a stunning live show, that delighted and entertained almost 6,000 clubbers through to the early hours.

Mika’s show stopping live performance was the third in a series of ten parties being held at Amnesia, Ibiza by MTV this Summer. The coming weeks will see 2ManyDJ’s, Mark Ronson & The International, Robyn and Richie Hawtin presents Plastikman Live, with Primal Scream set to blow the roof off for the closing party on September 2nd. Tickets priced 50 euros from www.mtvibiza.com