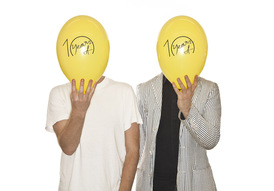 Joy Orbison shouldn’t need any introduction but for those of you that have been residing on Mars the last few years he first got major props after his huge hit “Hyph Mngo” on Scuba’s excellent Hotflush label. This track was selected as the best record of 2009 on Resident Advisor and deservedly so with its irresistible futuristic garage groove and sweet vocal that made it such an anthem. Far from resting on his laurels Joy has continued to put out exceptional music mainly though his label Doldrums with tracks like “Ladywell” and also the recent hit “Wade In”. His tracks are super fresh with killer drum programming and basslines but give a healthy nod to House and Techno’s four four sensibilities.

Our second guest Patrice Scott is without doubt one of our favourite DJs and indeed producers with his classy, timeless productions on his Sistrum imprint and remixes for the likes of Dial. The word deep definitely springs to mind but this wouldn’t really get across the scintillating energy a Patrice Scott DJ set creates.

Once again, capacity is strictly limited for this and will more than likely sell out in advance, so we urge you not to hang around. The forecast for Sunday is currently 23c and sunny but should the weather severely let us down, there is a great club space with natural light within the building that we can move the party into if need be – so the show will go on!

And finally, the ’10 Years of secretsundaze’ album is out on Monday. The new double CD mix compilation features tracks from labels including Planet E, R&S, Ostgut Ton and Hospital Records. Pre-order your copy HERE.