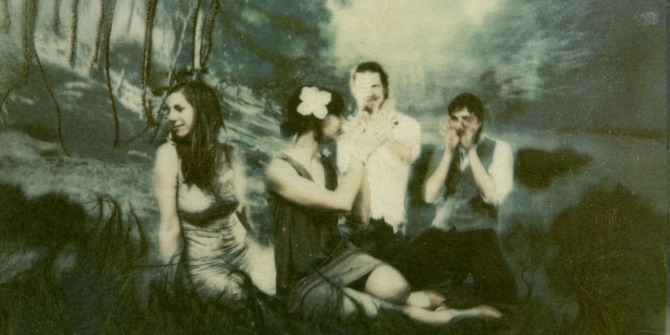 Esmerine was co-founded ten years ago by percussionist Bruce Cawdron (Godspeed You! Black Emperor) and cellist Rebecca Foon (Thee Silver Mt. Zion, Mile-End Ladies’ String Auxiliary) soon after the two met while recording the first Set Fire To Flames record Signs Reign Rebuilder (2001) at the old brothel at 10 rue Ontario Est in Montreal. Esmerine released two critically-acclaimed albums of modern chamber music, If Only a Sweet Surrender to the Nights to Come Be True (2003) and Aurora (2005) that have one foot in the new music/experimental terrain of contemporaries like Rachel’s or Town And Country and the other in the more visceral and lyrical landscape populated by the likes of Dirty Three (and GY!BE themselves).

While Beckie’s activity with Thee Silver Mt. Zion increased through the middle of the decade and Bruce deepened his study and practice as an acupuncturist, the duo continued stoking the fires of Esmerine, with occasional live performances and special events in Montreal over the past few years – often including invitations to guest musicians to collaborate with the group on one show or another. With an expanded line-up, Esmerine have recorded a new album, La Lechuza, with musical guests including Sarah Neufeld (Arcade Fire), Colin Stetson, Mishka Stein and Robbie Kuster.

To hear some of La Lechuza check out the Esmerine website.

Esmerine will play London’s stunning Union Chapel this September. Tickets priced at £12.50 are on sale now, full details below…

Balkans September tour with PS I Love You