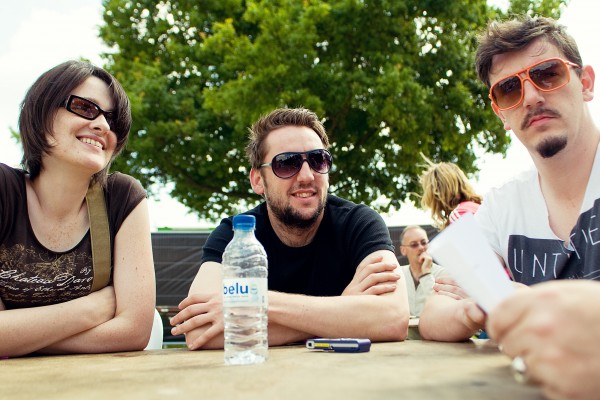 AAAmusic’s Dave Livingstone met with GoGoBot – here’s what they chatted about!

AAAmusic: Hello GoGoBot (that’s Marko – lead vocals & guitar, Gordon – on drums & Rosie – on bass). So, to start with, can you explain the band name?

M: We needed a name for the band and just came up with it; it’s as basic as that. But we did have a shared experience sleeping in a twin bed at a Travelodge, and we both (M&G) woke up in a horrible sweat, looked at each other and said…GoGoBot.

AAAmusic:  How did the band come together and did you all know each other previously?

M: Yeah, we all knew each other for years really, Gordy and I have been doing the circuit for a while and we’ve been in a few different bands, then we had a big break, Gordy was very busy and I was leading a civilian life style. Then Gordy had the idea to start a band, and get back out their again – but this time let’s do a bit more of a pop thing. So we worked as a 2 piece for about a year…. trawling around….. we ended up supporting Glasvagas, then when we finished the short tour with them we realised we needed to broaden our music into something even more popular, and that’s when Rosie came in – she saw us gigging just as a 2 piece back in Glasgow, and I don’t know what you (Rosie) were thinking, but she thought obviously these guys need a bass player, as we just had me (M) playing guitar and Gordy on drums dishing out a whole lot of aggressive noise, which at the time we were calling pop.

G: To be fair though there were lots of compliments saying how we rocked as a 2 piece, we slammed it and people got it. But we thought yeah, we’ve been in bands before and musically we were kicking ass you know, but then Rosie came on board and we just started writing songs for about a year I suppose. Then of the back of that came a lot of stuff from the ‘See Saw Series’ (this is GoGoBots 6 single release over 2011).

M: We kept ourselves pretty much like hermits in a cave in our studio in Glasgow, just sorting out our sound and making sure that everything was as good as we could make it, so it could go to product straight away, that’s when we found our management at the start of the year – and we haven’t looked back since.

AAAmusic: Tell me about any previous jobs…

R; Yeah, I think we’ve always had wee jobs just to try and tide us over. I started playing music when I was quite young, then I did music at college and Uni, then started playing in gigs and touring a lot. But things can be difficult at times so you have to have your wee job to keep yourself afloat.

M; I like to work in a laundrette just to keep me grounded.

AAAmusic: Give me your views on the charts today. Don’t hold back, just your thoughts on the modern music direction?

R; Well, there’s a lot of Hip-Hop & R’n’B around, which although is not our thing, it seems to be what people want to hear. But music always goes round in circles, and there’ll be something different soon enough. Indie, rock or pop you know.

G: Well, it seems that during the 80’s & 90’s you have bands that had to physically move 10’s of thousands of records to get into the charts, and that doesn’t seem to be the case anymore.

AAAmusic:  when you first started playing music, did you stick with the same instruments you have now or start with something different?

G; For me, I started out with a bass guitar, I just seemed to gravitate towards it at school then I heard someone playing a drum kit and I though…. wow, and it’s been the same ever since then.

M; I guess for me, I’ve always been a guitarist, always……but about 3 or 4 years ago Gordy decided that I was going to sing, so now I’m a singer I guess. I haven’t been a singer for a very long time, that’s compared to anyone else that’s singing today, so I’m a new kid on the block when it comes to the ol’ vocals.

G; But this one here (pointing at Rosie) is multi talented,

R; Yeah, I can play everything! I started playing piano first when I was quite young. Then I took up the Cello, which was quite funny …….., I played it for a couple of years in some orchestras and then I started getting into guitar when I was about 16 or 17. I just really wanted to learn to play guitar, I sort of taught myself then I went to college and have been playing ever since.

AAAmusic:  what’s the most ‘Rock Star’ thing you’ve ever done?

M; Maybe I should answer this one…. you see…. I rock’n’rock for the 3 of us. These guys generally are quite well behaved you know, until you get them by themselves. But me I’m probably the reckless one,

AAAmusic:  if you had to give up music, what would you do to be creative?

M; I would paint. First and foremost I was an artist, that was the very first creative thing I ever done, and I was pretty good at it…. I don’t mind saying that, as I did well for myself at the start. Then when I got into music I seemed to lose all that. I think music eats up your life, and stops you from being creative at anything else, so maybe in a few years time I’ll start doing something else.

R: This isn’t really creative, but I’d like to be a ghost hunter. I love the ghost ……..stuff. I’m a qualified paranormal investigator.

AAAmusic:  You know when you’re watching Most Haunted and someone gets hit by a small stone….. That’s just someone throwing a wee stone……

G; You remember in The Shawshank Redemption, when the guy got out of jail and he didn’t really know what to do with himself, cos he’d been so used to doing the same thing for years. I’m the same; I do music production as well, so if I wasn’t playing drums I’d probably produce.

M: Let’s get a wee plug………. the studio is the ‘Control Room’ and it’s next to North Glasgow college. Very reasonable rates.

AAAmusic: what’s the strangest venue or gig you’ve ever played?

M; For GoGoBot the strangest gig was playing at the opening if a new set of flats in a place called Lochearn in the east side of Glasgow. I was born and raised in the east side of Glasgow and it’s very rare that flats open. So, this was a massive event for us. It was actually really good, we had a great time, it rained, the rain went away and then it came back again. It was a bit strange; we were essentially playing from the side of a truck in the middle of the street. It was really good, there were loads of kids there and the stage was right next to a playpark, and it was one of those really modern playparks with all the fancy new things that you don’t quite understand – but the kids are all over it you know.

G; I’ve been talking….. we’ll we have this friend in Sweden who’s got his huge, huge boat, I think a catamaran or something, and we were talking about potentially bouncing around different ports in Europe and playing in the ports at each city.

M; Does that hark back to the days of Duran Duran…..I’ll need to buy a linen suit jacket and role up the sleeves.

AAAmusic: what do you least like about the way you play?

R; Well, there’s always something – you could think you’re playing great, but someone in the crowd might think different, but then again you might make one wee error that no one else would notice but I’d know it’s there and that really annoys me. I always beat myself up if I make a mistake. I’d like to be able to play really fast and be amazing.

G; I concentrate on being 100% solid across the whole gig, and I think I do not too bad. But for me, if I see those 2 smile at a gig, that’s when the 3 of us are rockin’ it, and I think if we could do that more often – the X factor, we could do more of that definitely.

M; just going back to the X factor thing. I think that since these programs have been around, people expect performance artists like us to work a lot harder to make sure things are right. I mean, I remember when I was a boy and Kurt Cobain was just swinging the guitar about like an idiot and smashing it up of the amp, it sounded really great to me at the time, but if you go on and do that now, you’d just be boo’d off the stage. It’s not to be accepted these days, so for all the good and all the bad of it, I suppose I am a guitarist from the church of Cobain, so I guess I’d probably like to be a little bit less wild and a little bit more controlled, and do things properly.

AAAmusic: We have a question about Rush – would you marry, screw or kill?

G; Ah… ok. I would eh….I would marry Neil Peart and I’d screw Geddy Lee, and I would……… screw Alex Lifeson!

M; I don’t have any opinion about Rush, I think we’ll just leave it at that. For me they’re not a good or a bad band, they’re a cult band and they have a load of fans. It’s just not my thing.

AAAmusic: Spirit of the Radio is one of the all time favourite summer songs.

M; if you say so…. I might have heard that song…… I have no idea….. (Gordon sings Spirit of the Radio in a Bee Gee’s style).

AAAmusic: Have you had any formal music training?

R; Yes……… do I need to go into a formal explanation?

G; No, I learnt from Rush in concert, honest to god.

M: I learnt from Kurt Cobain and Slash.

AAAmusic: Any other things you’d like the fans to know?

R; Well just about our new single, called Turn the World Around, its out on the first of August. Appreciate it if you could check it out, the videos on line just now and …….check us out.

M; I want the fans to know that we love every single one of them, and all we want is hugs and kisses at the front of the stage when we get there, so come and see us and talk to us. We want to reach out and touch someone.

G: Hugs and kisses and rum and coke.