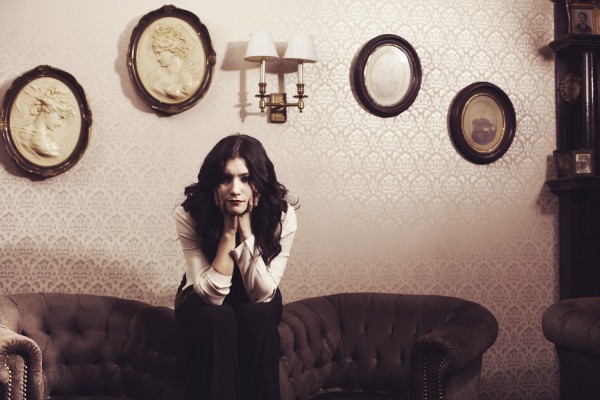 Detroit born Alex Winston has announced news of her next release; the brand new ‘Velvet Elvis’ will be released as part of an EP on September 12th through Island Records.

An enigmatic artist, at first glance Alex Winston’s music appears upbeat, but on closer examination, her lyrics reveal subject matters brimming with strange and provoking subjects. ‘Velvet Elvis’ – the EP’s lead track examines the notion of objectum sexuality; where people have fallen in love with objects, often humanising them: “Ma said I ain’t right / Clutching on you all night / But you’re my, you’re my guy / Elvis”… “When I feel your velvet / I can’t help it / You don’t breathe / So you can’t leave me”.

Backed by ‘Fire Ant’, another new song from Alex, it beckons at what untold surprises are in store for the multi-instrumentalist’s forthcoming January album. Traces of her motown influences can be felt in the track alongside stunning percussion, eerie harmonies and propelling drums culminating in a wall of sound in the last 10 seconds of the song. King Charles, the acclaimed London solo performer takes on remix duties for ‘Velvet Elvis’ to complete the EP.

Having released a critically acclaimed mini album earlier this year, headlined a NME Awards Show, Alex is currently putting the finishing touches to her debut album – due January 2012 through Island Records. She has been working with producers Bjorn Ytlling (Lykke Li), The Knocks and the award winning Charlie Hugall (Florence and the Machine, Crystal Fighters).

Alex is also working on a 4-piece documentary with various film makers exploring some of the interesting oddities that have influenced her whilst making her album; including beauty pageants and fortune cookie writers.

Those who have seen Alex live can attest to the energy and power of her performance whilst the presence of her band and backing singers – known as The Sisterwives – gives them an almost cult-like quality. Alex will be returning to the UK for a string of festivals and is not to be missed.

“Her vocals are reminiscent of Kate Bush in terms of tone, but she also has an edge of quirkiness and a feverish delivery that lends urgency even in the moments when lyrics become foggy.” PITCHFORK

“A 22-year-old Detroit singer-songwriter and multi-instrumentalist, who is classically trained in opera but is causing a stir in the indie and pop worlds with her dizzying pipes and heartfelt lyrics.” SPIN

“Winston takes strong inspiration from Motown girl groups and crafts nostalgic pop songsm but she sets herself apart from her predecessors, by using the pop song formula to showcase more thought provoking lyrics. Her stage persona shifted from dramatic to funny multiple times and she never fails to deliver as a vocalist or performer.” BROOKLYN VEGAN