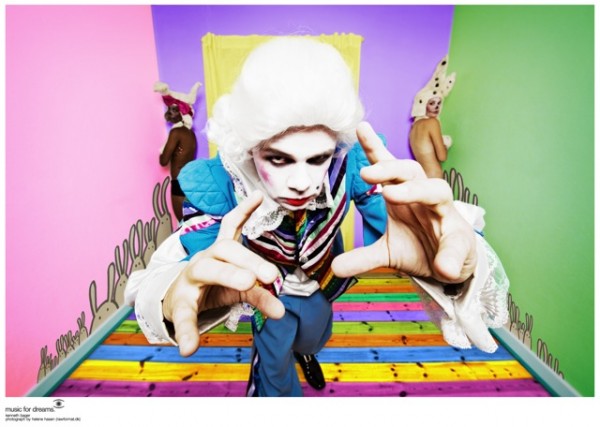 “When I heard that Kenneth turned up to a meeting at Sony Germany with the album and a loads of pet boxes full of white rabbits which he then released in to the room, I thought to myself, I have to meet this guy. Then I heard the record and thought it was both genius and perfect fit for Deconstruction” Mike Pickering, MD of Deconstruction Records Sony Music.

Pioneering dance music label Deconstruction Records are proud to announce their new signing, the legendary musician, DJ, club promoter and producer extraordinare, Kenneth Bager. Joining a roster of artists that range from Beth Ditto and Sasha to Retro/Grade and Way Out West, Calvin Harris being the labels new A&R. Bager inked the deal with Sony Music VP of A&R and Deconstruction MD Mike Pickering, and is set for a UK release of his single ‘The Sound of Swing’ and album ‘The Sounds of…’ through the label this summer.

Kenneth Bager’s career to date has spanned over three decades. ‘Denmark’s original space cadet’, as he is referred to by Pete Tong, first made waves on the European dance music scene in the early 80s when he initiated and ran Copenhagen’s answer to London’ Shoom’, the now worldwide renowned Coma Club parties. Through the Coma Club parties Kenneth was responsible for bringing the likes of Sven Vath, Todd Terry, Paul Oakenfold, Norman Jay, Coldcut and The Orb, to Denmark for the first time. Fast-forward to this decade and Kenneth Bager continues to influence many. In addition to continuing his promotion of the Coma Club parties alongside his new club venture Home Party and DJing for P3 Radio Station (Denmark’s equivalent of Radio 1) along with his own weekly radio show at Ibiza Sonica , Kenneth spends his time producing music and running his Music For Dreams label. It was on Music For Dreams that Kenneth originally released his self-produced album, ‘Fragments From A Space Cadet’, which garnered critical global acclaim and a Grammy nomination in Denmark. Now set for release under the title‚ The Sounds of…’ , the album has been picked up by Deconstruction Records and is set for a UK release in September of this year.

‘The Sounds Of…’ provides the perfect introduction to the weird and wonderful world of the Kenneth Bager experience, where Balearic electronica soundtracks scenes of decadence, beautiful women frolic in lacy underwear, white rabbits are regarded as equals and the man conducting the party is dressed as Mozart. One of the stand-out tracks on the album is the forthcoming single ’The Sound Of Swing’, a timelessly melodic summer anthem in the making which features Kenneth’s own children’s choir alongside the soulful crooning of Aloe Blacc.

‘The Sounds of Swing’ by The Kenneth Bager Experience will be released by Deconstruction Records in September 2011, followed by album ‘The Sounds of….’

“Danish Dj and dance entrepreneur Kenneth Bager is the original space cadet who singlehanded introduced the Scandinavians to House music and the Balearic scene via
his famous “Coma Club parties” . “ Pete Tong