First, ATP Curated by Jeff Mangum – then scroll down for the Nightmare Before Christmas curated by Battles, Caribou & Les Savy Fav… 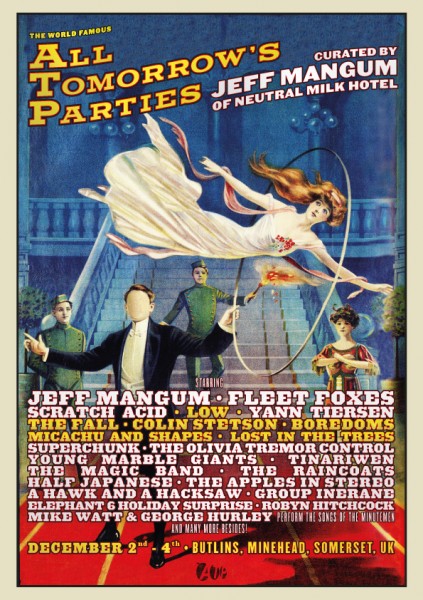 This December the world famous All Tomorrow’s Parties will present the return of Neutral Milk Hotel’s Jeff Mangum to headline and curate one of our two festival weekends at Butlins, Minehead, UK. Tickets are selling fast – please note a small amount of extra 3 berth apartments have now been released – apartments are on sale via Seetickets.com, Gigantic.com and Wegottickets.com. Today we can announce another group of fantastic line-up additions chosen by our curator Jeff Mangum…

First of all we’re very excited to announce one of the most unforgettable live performers on the planet and an ATP favourite JOANNA NEWSOM. We can confirm a performance by Sonic Youth’s THURSTON MOORE, who released a new solo album earlier this year. Playing one of their first UK shows since 2008, lo-fi legends SEBADOH also join the bill, as do the incomparable jazz collective the SUN RA ARKESTRA led by Marshall Allen. We are pleased to announce that Jeff has picked THE MOUNTAIN GOATS who will be making their long awaited ATP debut. Finally New York based electric folk group TALL FIRS will also appear.

…with much more to be announced! All tickets include accommodation in private apartments for you and your friends, see ‘About The Venue’ further down for more details. All performance take place indoors with fantastic soundsystems. 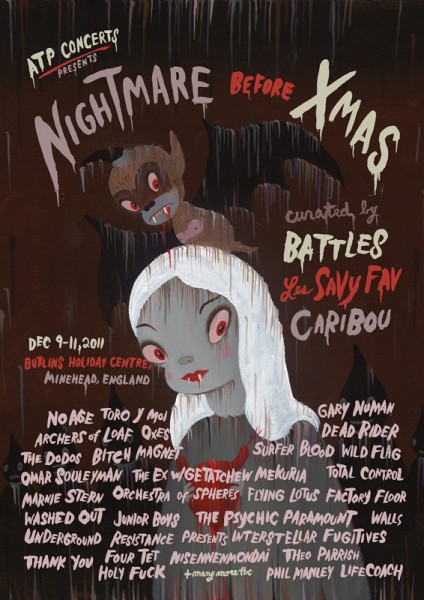 All Tomorrow’s Parties second festival weekend for December 2011 at Butlins, Minehead is the Nightmare Before Christmas – this year curated by three of the most stunning live acts on the planet – Battles, Caribou and Les Savy Fav. As previously announced each band will headline and choose a line-up of 14 artists for one day of the festival. Today we can confirm a new set of additions with more yet to be chosen by our illustrious curators…

First up we are very excited to confirm that HOT SNAKES will reform for this event at the request of Les Savy Fav – this American rock group led by Rick Froberg (Drive Like Jehu, now of Obits) and John Reis (Drive Like Jehu, Rocket From The Crypt, now of Night Marchers) formed in 1999 and were one of the most vital and exciting live acts of the era. ATP are very excited that Dan Snaith of Caribou has chosen PHAROAH SANDERS – a legend in Jazz circles due to his incomparable work with John Coltrane, Don Cherry, Alice Coltrane and his own classic albums including the unforgettable Karma LP. Other additions are the SUN RA ARKESTRA, Brisbane based rockers VIOLENT SOHO, the much loved SIMIAN MOBILE DISCO DJs, acclaimed new indie pop group CULTS, plus two fantastic electronic artists in the shape of THE FIELD and MATIAS AGUAYO.

Hot Snakes, Violent Soho and SMD DJs were picked by Les Savy Fav; Cults, The Field and Matias Aguayo were picked by Battles; and Pharoah Sanders & Sun Ra Arkestra were picked by Caribou. That means that the line-up so far now looks like this…

In total the line-up will feature 45 live acts playing across the weekend on three indoor stages with a total festival capacity of less than 6000 people. The event also includes DJs, Cinema and much more. All tickets include accommodation in private apartments for you and your friends, see ‘About The Venue’ below for more details.

Tickets for Nightmare Before Christmas are priced at £170.00pp for room only & £180.00pp for self catering – on sale now through Seetickets, Gigantic and Wegottickets via www.atpfestival.com.

The Earth Is A Man – New Video

Nevermind to be re-released in deluxe 20th anniversary editions