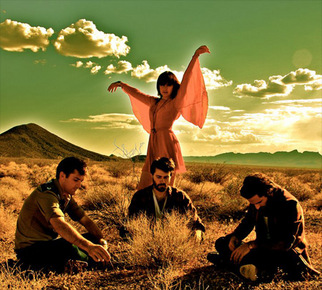 Howling Bells are giving fans the chance to get a free preview of their spectacular new album in the shape of a free download of its title track.  “Loudest Engine” is available now from www.howlingbellsmusic.com, giving a thrilling first peak at the record, which will be released on Cooking Vinyl on September 12th.

About “The Loudest Engine”

Recorded in Las Vegas with The Killers’ Mark Stoermer producing, “The Loudest Engine”‘s release will be accompanied by a clutch of live shows, including a date at London’s Electric Ballroom on September 15th.  The album will be preceded by a single, “Into The Sky” on September 5th.

Says Stein of the album, “There’s a singular sound which is more folk and rock than our last two albums, but it’s interpreted in a modern sense. It wasn’t a conscious effort to make a ’70s tinged record. It was a very natural progression.

“The album shows that we’re 21st century kids making a modern psychedelic record. [It] is our grown up record. The first was about that great initial leap, the second was us exploring different waters. This one is us, all having met at one place, at one time. I think this record will change people’s perspectives of the band.”