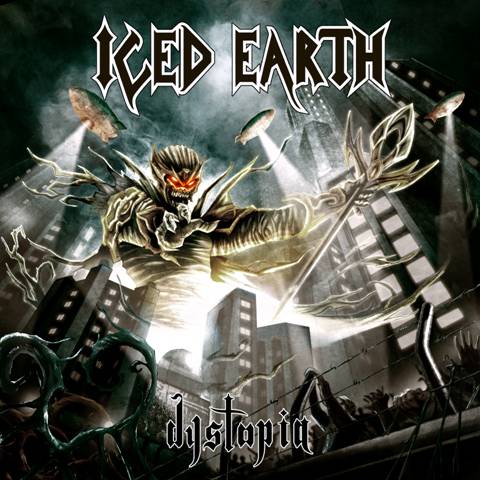 GRAND RAPIDS, MICHIGAN (USA) – Although “Dystopia”, ICED EARTH’s 10th studio offering, is not a concept album, founder Jon Schaffer admits there are unifying themes to several of the songs – and even an appearance by band mascot “Set Abominae.”

“I’ve always been fascinated by the darker side of life,” Schaffer said during a break from master tracking ICED EARTH’s forthcoming album. “Movies like Metropolis, Brazil, and The Matrix resonate with me. The same for albums like 2112, The Wall, and of course Operation:Mindcrime. Their images of a soulless, repressive society stuck with me over the years. It must be the sci-fi fan in me.”

In much the same way “Horror Show” (ICED EARTH’s tribute to classic characters from literature and movies) was born, Schaffer said his interest in dystopian themes in music and movies led him to try his hand at that genre as well – even paying homage on the new album to the movies Dark City, V For Vendetta, and Soylent Green. The end result is ICED EARTH meets the nightmarish offspring of Brave New World and Blade Runner.

Of special interest to long-time fans are two songs on “Dystopia” (the title track and “Tragedy and Triumph”) that feature the return of the “Something Wicked” storyline and “Set Abominae” – who, when last seen in “The Crucible of Man” [2008], had taken his position as ruler of the world.

“The opening song is a step back timeline-wise from the ‘Come What May’ track,” said Schaffer. “‘Come What May’ [the last track on “Crucible”] sets the scenario that it’s up to us and the decisions we make that will determine the future of the human race. These two songs [on “Dystopia”] take place at a time when people are in highly controlled prison-like city states, and their eventual emancipation in the closer, ‘Tragedy and Triumph’.”

In an uncanny case of art imitating life, Schaffer said Set Abominae fit perfectly with the general theme of “Dystopia”. “I remember it hit me like a ton of bricks in ’97, the whole Something Wicked story did,” Schaffer said. “I thought, ‘Man, this is going to be so cool.’ Many years later, we were on tour for Crucible and we were doing an interview over in Eastern Europe. A buddy of mine said, ‘You know, Jon, this whole Something Wicked thing could be true.’ I thought about it a moment and said, ‘Well, I don’t know about that. But there are some creepy parallels in contemporary life.’”
“So as I was thinking about all of the great movies, albums, and books with dystopian themes, I remembered that conversation and it occurred to me that the Something Wicked story could continue in a few tracks here very nicely,” Schaffer said.

Schaffer admits the recording of “Dystopia” has been especially challenging because of the band’s summer festival gigs requiring him to criss-cross the ocean numerous times.

Despite the challenges, Schaffer says working with new vocalist Stu Block is “a pleasure.”
“You just can’t ask for a better attitude,” said Schaffer. “Stu is so excited to be here. He brings a youthful exuberance to the band, which is a lot of fun. And he’s a real dude. He’s down to earth, and willing to try anything that Jim [Morris, co-producer, engineer] or I throw at him. He’s stepping into the shoes in a very natural way.”

Schaffer continues: “We’re opening up a part of his voice and a style of singing that he didn’t even really know he had. We’re exploring this whole new range. And we’re just getting started. I believe Stu will continue to grow – and has the potential to grow – into one of the greats, one of the guys that will go down in metal history. If he stays on this course, with the attitude that he has, his willingness to learn, and his passion, he’s destined for really great things. I firmly believe that.”

“Dystopia” is scheduled for release in Europe on October 17th, and in the U.S. on October 18th both via Century Media. Two bonus tracks are also being recorded for inclusion on special editions of the album.

The release of “Dystopia” will be followed by the most extensive world tour Iced Earth has ever undertaken. The European leg of the 2011-2012 World Dystopia Tour begins October 30th in Bochum, Germany. See below for the dates!

Schaffer formed Iced Earth in Tampa, Florida, in 1984. Since then, he has released 9 studio albums, one live album, two compilations, three boxed sets, and several DVDs — the most recent of which is “Festivals of the Wicked”. With worldwide sales in the millions, ICED EARTH has earned a seat in the pantheon of America’s most successful heavy-metal bands.