A Chat With The Boxer Rebellion 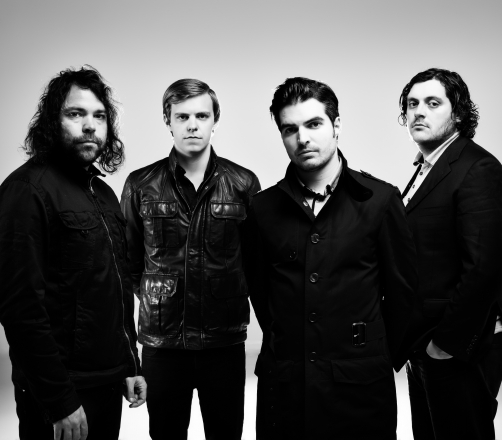 The Boxer Rebellion are a truly independent indie four-piece, and one of the most emotive rock bands that the UK can almost claim as their own (one member is American, and another is Australian). AAAMusic chatted with the whole band before they took to the stage for their fine, Great Stage set at The Secret Garden Party 2011….

AAAMusic: You’ve been a band for about 10 years…

AAAMusic: The record industry has changed a lot in that time. What differences have you noticed in the way you go about making music and planning tours these days compared with the early years of your career?

Adam Harrison (bass): It’s far easier to get the word out now. I mean so many people spend so much longer on social networks, and so many people share information as part of the daily lives that you put an announcement about a tour or an album out there and the ripple effect is far greater than it was 10 years ago. 10 years ago we had certain tools, like we had a website and a kind of blog, but no one was anywhere near as connected as now.

AAAMusic: Are you guys active in running your own social media?

Nathan Nicholson (vocals/guitar): Yeah, well we basically run our own label and if we don’t do it no body else is going to. It’s very, very important.

AAAMusic: You spent most of your career unsigned right…

NN: Well we have distribution deals with certain labels, but everything else is our own label [Absentee Recordings].

AH: There are still great people out there at record labels, but with the knowledge that we’ve gained, at the moment there is not a better alternative to actually us running things. That’s not to say that a better alternative might not come along – we’re not diehard independent. But, for the moment, it’s the right choice for us.

AAAMusic: You’re very much involved in the business aspect of the band – has the changed the way you go about writing and recording?

AH: We keep that more separate. I think we write as we’ve always written. As soon as you make business decisions about what you want to write then the magic kind of goes away.

AAAMusic: Easy question – do you have a favourite Boxer Rebellion track?

PH: They’re all too good, so I could possibly pick one [laughs].

NN: On our new album I really like the track ‘No Harm.’

AAAMusic: You wrote a song for and made an appearance in the movie Going The Distance – can you tell us a little about that experience?

NN: It was really cool. It was fun to have that “brief,” where you go into a room and try out a few ideas and try appease a movie company, and then filming it. Taking part in the whole thing was pretty cool, and something we probably won’t get a chance to do again. We may be able to write songs for movies, and we’ve had our music in a lot of TV shows, but to actually be in the movie is a once in a lifetime thing.

PH: We got away with looking, you know, all right.

AAAMusic: You must’ve noticed an increase in your profile?

NN: Yeah! Especially in The US.

AAAMusic: Do they give you any guidelines to follow when writing the song for a movie?

AH: Yeah sure, we were given the script before and they had an actual scene that they wanted the song for. So we knew the kind of tone, and then on top of that they said ‘also we want to have this emotion in it, and that emotion in it’ – we’d send ideas back and forth, and they’d say ‘Yeeeah, nearly, may be more of that kind of stuff’. They didn’t tell us exactly what to write, but we ended up writing a bunch of stuff that they whittled down into what became the song.

PH: My favourite bit was when we had enough things going around that they were referred to as “Idea 1,” “Idea 2”…We had a conference call with someone in LA and someone in New York, and then somebody said ‘we really like what you’ve got in “Idea 1” and maybe after 2:26 you can bring what you’ve got in “Idea 3” into “Idea 1.”’ And we’re thinking – they’re two different songs! So from a songwriter’s perspective it was a kind of throw your hands up and get on with it – we became less precious about it.

AH: We just went with it…

AAAMusic: What bands have had the biggest influence on The Boxer Rebellion’s overall sound?

AH: I think probably Radiohead has been the biggest, but that’s not to say that they’ve been the only influence. We’ve got loads of influences individually.

NN: We disagree about a lot of stuff. I think we all agree we like the new Bon Iver album…

PH: I would say that Radiohead are our biggest influence, but it’s really awkward for people to say that we sound like Radiohead – it’s lazy journalism, and we get a lot of that.

NN: I really like U2, and I’m not afraid to admit it. I was reading something the other day, on NME.com. It was a Glastonbury poll of who people were going to see that evening: Primal Scream or U2. And all the cooler, s**t bands were saying Primal Scream – and I was like, ‘really?’

AAAMusic: I did actually go see Primal Scream over U2…

AH: I think both bands are overrated…

PH: I went to the comedy tent instead of Iggy Pop the other year. I was like ‘sod it, I want a laugh,’ and it was great. I mean, I saw him 20 years ago and it was amazing, but now I just feel really sad for him. Come on, he advertises insurance he’s not even entitled to.

AAAMusic: Back to the questions…What have been your favourite releases of 2011?

AAAMusic: You’ve got a date in London in September [sheps bush] – is it just a one off?

NN: I think we’re going to do about three of four in lead up to that.

AAAMusic: And are there any plans for a full UK tour before the end of the year?

AH: F**k the UK [laughs]. No in all seriousness, we’ve done the UK a few times. And when I say a few times, I mean maybe 10, 12 times. London is excellent, and they are a few spots where it’s really good, but it’s slow going. We’re seeing real progress in The States, and as an independent band that needs to count the pennies, obviously, at the moment, we need to prioritise The States – that’s the place where we’re getting our money and things are really moving forward for us.

James Morrison invites YOU to chat with him!