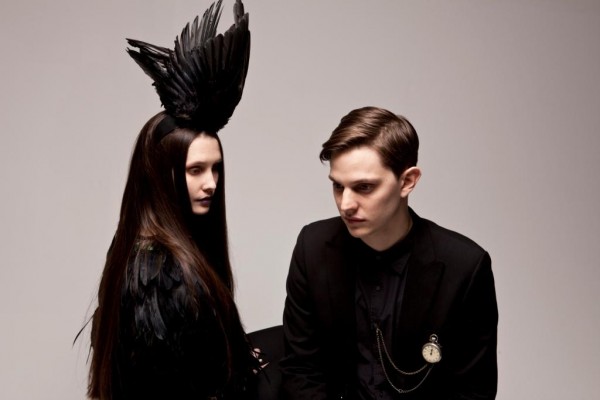 Those who have heard Alpines, a duo from South West London, write excitedly, struggling to make comparisons with familiar names from electronica and the avant garde – Cocteau Twins, Massive Attack, Burial, Portishead – but the truth is that the music is unfamiliar.

Alpines speak of their music being a mix of the organic and the electronic. A term they use themselves is ‘Night Pop’. This emerged from a period of intense late night travel through the empty streets of London. Listening to their own demos in such an environment informed their lyrics and arrangements, to create something darker.

The impact of their music can be immediate and insistent, while leaving the listener to create their own interpretation and emotion. Other passages are ethereal and delicate, almost dreamlike.

Catherine (vocals/keyboards) is an arts graduate with a fascination for fashion and design. Bob (guitars/production) studied film before deep involvement with music technology. Catherine’s songwriting flows from personal experience, whether expressed obliquely or direct.

Alpines see their music as part of a whole aesthetic of words, sounds and images that reflect how we live now.

For Catherine, ‘the beauty of nature and the power of the man-made are two themes which particularly influence the way I write music and inspire the overall aesthetic of Alpines. Art, music and design have always acted as a synonymous force in my life.’

Alpines are a duo standing at the crossroads of music, art and fashion, they are able to convey delicate emotions and some of the unsettling anomalies of modern life.