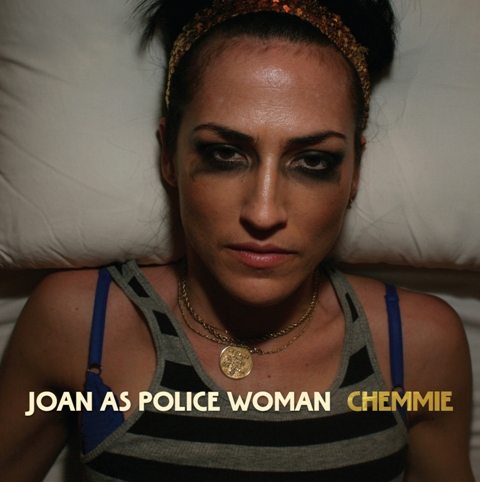 Taken from her latest album, ‘The Deep Field’ – out now

Currently wowing audiences across Australia, Joan As Police Woman hasn’t had time to catch her breath since the release of her latest album, ‘The Deep Field’. In demand across Europe and the US, days off at home in Brooklyn have become a rarity. Joan follows her Australian trip with a month long European tour, more US shows, then back to the UK for a run of headline shows and festivals including a return to Shepherds Bush Empire on September 9th – dates/ticket links below..

Meanwhile there will be a new single to sustain her ever-growing army of fans in the UK. ‘Chemmie’ from her latest album ‘The Deep Field’ will be released on August 1st.
In Joan’s own words, new single, ‘Chemmie’ describes “the undeniable chemistry that soars past logic” existing between lovers – a sultry, carnal lyric wrapped up in the form of ‘60s Philly soul.

The latest JOAN AS POLICE WOMAN album, The Deep Field begins with the words “I want you to fall in love with me,” and continues to unfurl an unashamed lust for life. It’s unquestionably her best, most significant album yet – in Joan’s own words, “my most open, joyous record.” A rocking, soulful journey, The Deep Field is Joan’s most personal, and her most universal album to date.

The Deep Field – the title refers to a tiny and far distant part of space – follows the critical and commercial success of her previous albums, Real Life and To Survive and it confirms, if confirmation were needed, that Joan Wasser is a truly original talent; utterly captivating both on record and on stage.

Praise for Joan As Police Woman’s new album, The Deep Field:
The Independent 5 stars – The Deep Field marks a quantum leap in the career of Joan Wasser. It has real emotional insight, couched in genuinely soulful arrangements bristling with imagination
Sunday Times 4 stars – a brooding funk that is intense rather than euphoric with Wasser’s voice floating lightly on top, this strangely soulful mélange proves addictive
Financial Times 4 stars – ravishly intimate
The Guardian 4 stars – at her Barbican show Wasser’s startling performance is rewarded by stunned silence, two encores and a standing ovation, each more deserved than the last
Dylan Jones/The Independent Magazine – Joan Wasser’s music – and indeed that voice, that beautiful voice – has been described variously as soul, jazz and thrift-store rock, and a mixture of all three.. She is the alt Lady Gaga – less dramatic, with a sweeter disposition. You’d be mad to miss her.
Attitude 4 stars – Joan Wasser’s blissful, torchy, serpentine touch has aligned her with PJ Harvey, Dusty (In Memphis era) Springfield and Al Green, but her third – and easily best – album ups the soul ante
NME – a voraciously soulful collection of some considerable beauty, utilising earthy beats and that remarkable voice, this is the sound of a woman alive and comfortable in her own skin
Uncut – deliriously good
The Mirror 4 stars – her stealthy concoctions of 70s funk and soul, abrasive guitars, poignant voices, warm brass and swelling strings remain fascinating
Q 4 stars – terrific. Joan’s warm, witty presence shines through

Dead And Divine – ‘ANTIMACY’ OUT NOW!