// AFTER 5 SELL OUT YEARS THE URBAN NERDS CARNIVAL SPECIAL RETURNS FOR THE BIGGEST UNDERGROUND NOTTING HILL CARNIVAL WARM UP EVENT IN EAST LONDON! 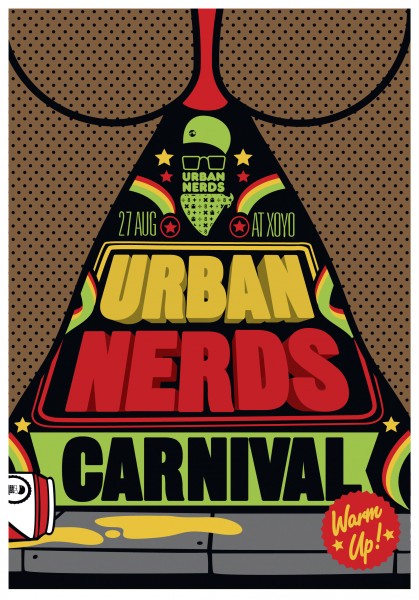 Back for the 5th year running, once again Urban Nerds come with a bass fuelled Carnival Special and East London’s biggest underground Notting Hill Carnival warm-up event! After five sell out years, for 2011 they take to XOYO in Shoreditch with an array of underground sounds, headed up by the dancehall, dubstep, baile funk and soca inspired Schlachthofbronx crew, who are joined by an army of DJs ready to bring the Carnival vibe with heaps of reggae, moombahton, garage, funky, electro and of course lots and lots of party bass!

Flying in from Munich to head up the Urban Nerds Carnival warm up this year are tropical bass duo, Schlachthofbronx! Their distinct party sound draws on a multitude of global beats spanning dancehall, dubstep, Baile Funk, rave, soca and a whole lot of bass and they’ve made a name for themselves playing worldwide alongside the likes of Major Lazer and Buraka Som Sistema, including supporting M.I.A. on her 2010 European tour! This year they dropped ‘Nasty Bass’, their debut EP for Diplo’s world-renowned Mad Decent label, following up with the acclaimed ‘Chambacu Remix EP’ that features tropical moombahton flavours re-fixed by the likes of Smutlee, Solo and Toy Selecta! Schlachthofbronx are the perfect bass merchants to bring the Carnival vibes to XOYO for what promises to be a true homage to the proper Caribbean and South American tropical rave at Urban Nerds this August!

A1 Bassline lives up to his name with a production back catalogue and bone shaking DJ sets that fuse a wealth of take-no-prisoners sub low basslines for maximum rave effect! His versatile productions have smashed electro, fidget, dubstep and house styles, all with a healthy injection of bass. In 2009 A1’s massive ‘Bad Man Horror Theme’ dropped on Southern Fried Records, destroyed clubs up and down the country before forming the soundtrack for Nike’s 5 campaign. ‘Breathless’, ‘Stabs’ and ‘Girl Thing’ as well as the recent ‘Falsehood EP’, released on his own rising imprint, Tighten Up Records.

Fact Magazine have Melé tipped as one to watch in 2011 and every DJ worth his salt who’s seen him play has nothing but love for this 18 year old upstart. With deep minimal bass incarnations tearing up the clubs at the moment and re-works for the likes of Mad Decent and Mumdance, tunes like ‘Trappin’, have propelled Melé into the limelight and him earned him
fans such as Toddla T, Brodinski, Hervé and Sinden, who’s picked him up on his Grizzly label. His recent Rinse FM guest mix for Monki is well worth checking out. Watch things go nuts at his debut Urban Nerds set in August!

Reggae Roast are taking over room 2 for some true Carnival vibes! They’re now one of the most vibrant, new reggae collectives in the UK and since 2007 have been spreading their sound of conscious roots music across the globe, contributing to some of the country’s greatest musical movements, including; Glastonbury, Fabric, Bestival, The Barbican, Jazz Café, The Big Chill and Outlook Festival, whilst building a reputation as the freshest roots sound in town. Residents Exel & Moodie continue to smash it with bookings across Europe, whilst previous Reggae Roast guests include the like of David Rodigan, Lee ‘Scratch’ Perry, Sly & Robbie, Finley Quaye, Mad Professor, Channel One Sound System and Iration Steppas, to name a few. Alongside special guests The Heatwave, they get ready to bring the real flavours of Notting Hill to XOYO for dancehall, ragga, bashment and of course reggae party sounds!