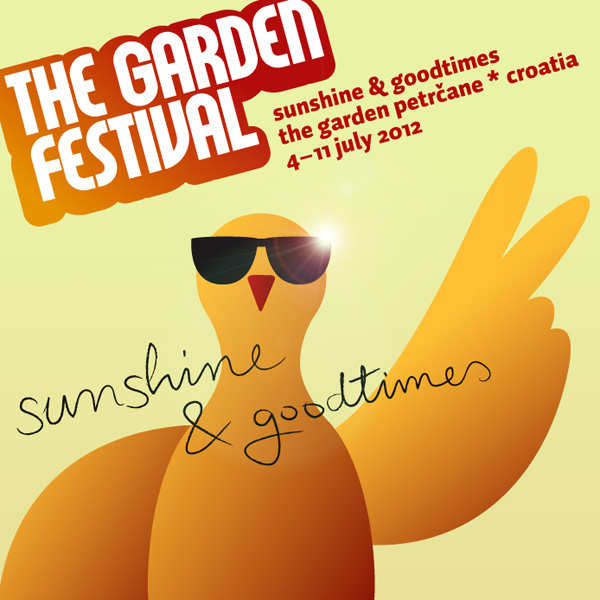 The Garden Festival Croatia:
2012 Dates Announced!
• This summer’s Garden Festival hailed as the best yet
• Dates for 7th instalment of intimate Adriatic partying confirmed for 2012 – dates are Weds 4th – Weds 11th July
• 200 early bird tickets of £80 are on sale now, go to www.thegardenfestival.eu
• The original and founding Croatian odyssey continues to evolve into one of the world’s leading festivals!
Selected quotes from 2011:
“I enjoyed the tranquil beach setting, the great musical backdrops and the people a lot. I also got to hang out with Robert Owens for a little while, so it was a great time for me.” Larry Heard
“The Garden Festival is for sure one of my favourite festivals. The setting is very beautiful, it has a really nice size which gives it a very personal and intimate feel and the people are up for a party in a most friendly way. And not to forget the boat cruise parties. Oh my god the cruises…” Tensnake
“One of Baby Prince’s favourites, the Garden festival was just the right amount of people, a range of different music and of course a uniquely beautiful setting. The kind of place you forget your there to play and end up having a good time with everyone else.” Wolf and Lamb
“Probably the most beautiful festival site there is. Beautiful people, great music. What more could you ask for?” Motor City Drum Ensemble
“The Garden Festival is largely responsible for the relatively recent explosion of festivals in the small village of Petrcane on the Adriatic, and there’s a reason they continue to be a benchmark: Nick and Charlotte Colgan, Gail and Eddie O’Callaghan and the Futureboogie crew match the music to the climate. Disco abounds. House can be heard. But the tempo rarely gets too high. Neither does the blood pressure.” Resident Advisor
** www.thegardenfestival.eu **
*****
Now the sun has set on this year’s stunning Garden Festival odyssey, sights are already being set for Weds 4th – Weds 11th 2012. As Croatia continues to evolve into one of Europe’s hottest destinations – temperature wise and figuratively too – the Garden remains the original and founding event which has inspired people from all over the world to travel to the region and a little slice of paradise in Petrcane.
This summer’s week-long Adriatic adventure saw one of the strongest lineups yet performing to a sold-out crowd, including Odyssey, Electric Wire Hustle and Art Department live along with DJ sets from Wolf and Lamb, Soul Clap, Greg Wilson, Norman Jay, Benoit and Sergio, Kon and Amir, Qool DJ Marv and many, many more.
Nick Colgan, one of the festival’s founders, says that, “We had a great festival this summer with a sold out crowd and the village was buzzing for 7 days and nights. For 2012 we will be on for a full week again, and are already working on our target list to perform. The site looked the best yet this year and the overall feel was amazing from start to finish, with some outstanding sets from Odyssey, Greg Wilson and Tensnake. We’re already looking forward to 2012!”
Limited early bird tickets are now on sale for £80 – get them from www.thegardenfestival.eu.
*****
Keep checking here for lots more info to come:
www.thegardenfestival.eu / www.watchthegardengrow.eu
*****
The Garden Festival runs from Weds 4th – Weds 11th July 2012
First 200 tickets at early bird price of £80 – get them quick!