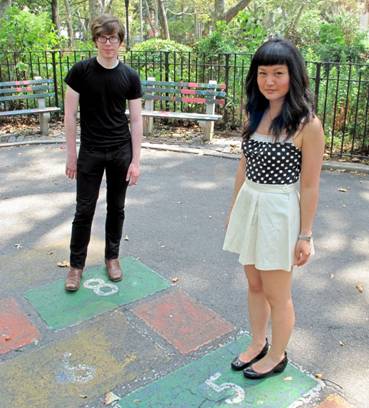 Chalk And Numbers today announce the release of brand new single ‘ Summer Nights’, to be released August 22nd.  Purveyors of a sound which reminds of a times gone by populated with legends like The Beach Boys and Dusty Springfield, Sable Yong And Andrew Pierce are a welcome change of pace. Far from drenching their sound in reverb and synth, they strip their sound back to its evocative best by avoiding all things modern (and digital) during the recording process, instead choosing to reveal current influences in a more earthy, organic way.

Summer Nights combines the otherwordly natural chemistry Youg and Pierce have . Yong’s charming, smooth vocals decorate a delicate, stripped back, throbbing arrangement. Her voice dances fairy-like over Pierce’s clever chords in a way which seems both assertive and vulnerable all at once. Her dulcet tone is something akin to a time portal to the greats of yesteryear. A tale of longing, wanton and lusty with tinges of regret,  Summer Nights perfectly highlights the unique personality of Chalk And Numbers. Like the band, it’s a track that can highlight a multitude of emotions. The first release from an upcoming EP, the future looks bright for this Brooklynite duo.

Reverend and the Makers ‘Riot’