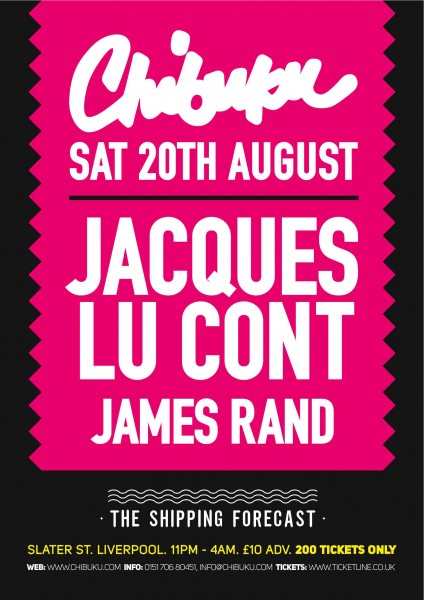 For their first foray to one of Liverpool’s leading venues, The Shipping Forecast, Chibuku have pulled something rather special out of the music bag. It’s now over nine years since he first made his debut at the club, for its epic 2nd birthday, which for the first time was a full three-roomed party of pure Buku brilliance. At the height of the French house and electronic-inspired sounds, one man was everyone’s lips, and he headlined that fabled night which remains one of its best: that man was Jacques lu Cont.

Chibuku’s first party in The Shipping Forecast is with the legendary JLC Aka Stuart Price, a Grammy award winning producer who has worked with some of the biggest acts in the world during his glittering career. He has remixed everyone from Armand Van Helden to Beck to Royksopp, and it was his now legendary Fabric Live CD which really cemented his reputation as a DJ who could cover many styles so effortlessly.

For anyone with an interest in Chibuku’s history, Jacques lu Cont was one of its defining names who helped propel the club through its vibrant and inspiring early years. Now he is back in the intimate confines of the The Ship’s Hold, for what promises to be something truly special…

The Narcoleptic Dancers to release first single from debut album