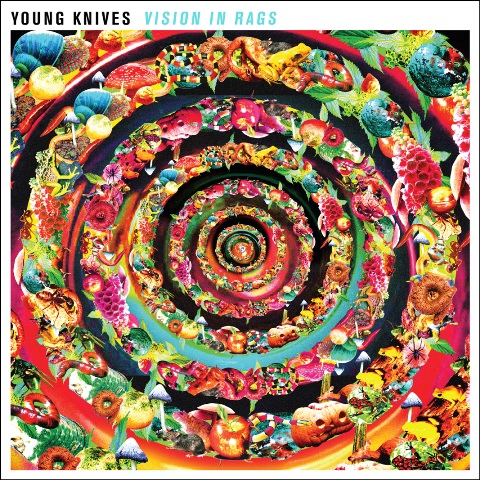 Young Knives announce the release of ‘Vision In Rags’ the third single from, ‘Ornaments From The Silver Arcade’, described by Time Out as ‘their third, and best’, on September 12th . ‘Vision In Rags’ melds the band’s well known piquant lyricism to a carnival swing fit to grace Notting Hill Carnival. The track features a legendary name and had an odd birth as The House Of Lords explains:
The Lyrics were done by chopping up the original song lyrics and re-arranging them and glueing them back onto a big piece of paper. The final recording of this song as we used an old analogue rhythm generator set to ‘bossa nova’ to get the hissy drum machine noise. You can also hear Congas being played by the legendary percussionist Lenny Castro who has played with Toto, Steely Dan, Quincy Jones and Stevie Wonder. All recorded in Steely Dan’s Drummers Studio over a Woolworths Keyboard and a toy steel drum while the crickets serenaded the night sky.
Young Knives continue their progress through a hectic summer of festivals with appearances at Truck Festival, Kendal Calling and Leicester’s Summer Sundae before the season is out, all dates are listed at www.youngknives.com.
The band have also been announced as headliners on the Dance To The Radio Stage on Thursday 25th August at Leeds Festival.

‘Vision In Rags’ is available to download as a bundle from September 5th with the following new and exclusive content:
1. ‘Vision In Rags’
2. ‘Schadenfreude’
3. ‘Hong Kong Minute’

‘Ornaments From The Silver Arcade’ is available now.

Robert Forster (The Go-Betweens) to release book: ‘The 10 Rules Of Rock ‘n’ Roll’