Vadoinmessico to release single: ‘Pepita, Queen Of The Animals’ 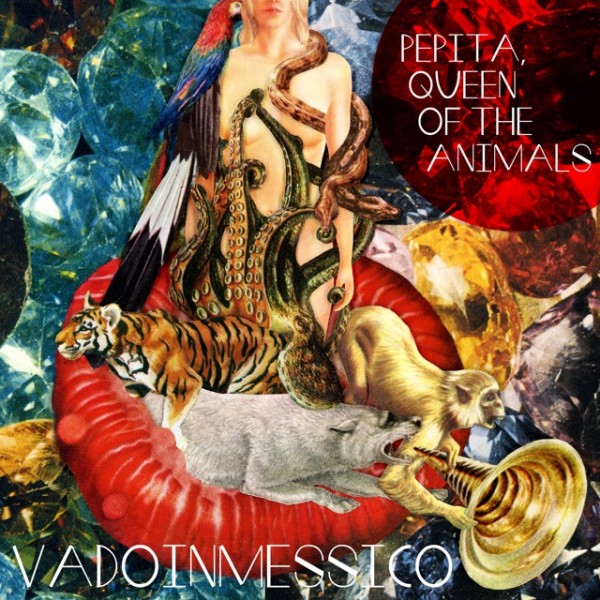 Adversity maketh the band. Vadoinmessico have spent a year without money you can fold or a studio to call home. Things were going well at first. The combustible sense of excitement meant that the songs came quickly. It was the sound of a band coming together cohesively for the first time. We were optimistic. Then things fell apart. Half of the debut album was recorded at the original Shunt HQ: then their license was revoked. Instruments were hauled on buses in rush hour and tubes in the dead of night. People argued. People looked for disused and often illegal places to practice. It was noisy. People called the Police.

Somehow, these nomadic circumstances eventually worked in their favour. No fixed abode had little relevance to a group of musicals from Mexico, Italy, Austria and the tropical delights of Exeter. Needless to say, they all live in Hackney nowadays, but they have been compared to Arcade Fire, and Animal Collective and even Tyrannosaurus Rex. The band is, of course, flattered by these comparisons and hopes their mix of nationalities and situations will serve to make them stand up on their own.

Giorgio is the songwriter, and his themes speak of lost lands and lost loves, of the nostalgia of his old home, and the excitements and intrigues of his new one. The sense of displacement in his writing is something many people living in modern cities will relate to.

Salvador has been his foil since the beginning and along with Alessandro on bass, Stefan on various stringed instruments, and Joe on drums, the band create richly crafted arrangements and textures that draw on all the emotions of Giorgio’s heartfelt lyrics.

Their single ‘Pepita, Queen of The Animals’ draws on African rhythms, bizarre instrumentation and beautiful melodies to create something that is at once a musical adventure, and a brilliantly crafted pop song.

Their debut single ‘Curling Up Your Spine’ released in May this year saw great support from R1 (Huw Stephens), XFM (John Kennedy), and the single and videos they released saw huge response on-line.

The band will be launching Pepita, Queen of The Animals, at their own club night on September 2nd at the Empowering Church in Dalston. This is the first of a monthly series that the band will be curating.

Vostok 5: an exhibition about people and animals in space