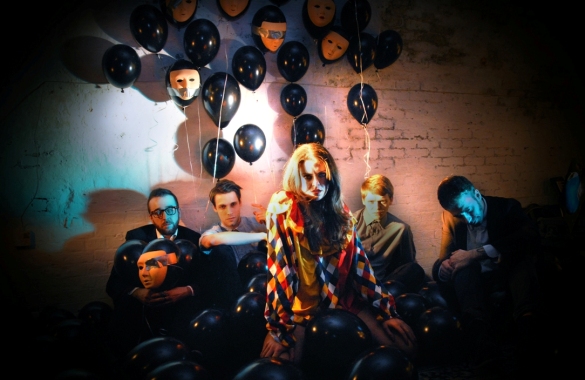 “Driven by a dirty, fuzzy bass, anti-establishment types Antlered Man go a bit SOAD with this rather good anti-capitalist rant” – Kerrang, April 2011
“As soon as we heard the filthy, dirty hulking bassline of AM’s debut single, we were hooked, line and sinker” – Rock Sound, April 2011
“Intriguing mash between the metally poetic darkness of SOAD and our own favourite Future of the Left” – Artrocker.com, March 2011
“This is a new kind of beast, Antlered Man has emerged as some unholy hybrid of QOTSA and Akron/Family. Part rock, part folk, part otherworldly. Big riffs combine with whistling, flute, violin and shredded slide guitar. Beware world, a new behemoth strides out across the land” John Kennedy XFM, June 2011

The last six months have proved a busy time for Antlered Man, having burst on to the scene with their high impact single ‘Surrounded By White Men’. The band followed up in June with ‘Outrages 1 ta 3’ which continued to blaze a trail of growing fans both in the press and at each live show. Now comes the first of two multi-track offerings dubbed the ‘Giftes’ series, ‘Buddhist Soup (Giftes pt1)’, is released on October 10th via the band’s imprint Goo Grrrl Records.The five track ‘Buddhist Soup (Giftes pt1)’ mini-album begins with June’s epic six minute single ‘Outrages 1 ta 3’, tantric rhythms move in to heavy riffs and choral chanting – a fitting introduction. Title track, ‘Buddhist Soup’, begins with strung out guitars and glockenspiels progressing to an infectious whistled melody that  will ensure this band are bound for a stratospheric rise towards the masses. Then you are slammed hard into a wall of soaring guitars and screams in a fitting crescendo for such a song. Damo Ezekiel-Holmes chants, “At least I know I’m ugly, a minimum I can be very cruel…”, cruel he may be, but the accomplished nature of Antlered Man’s work is almost certain to pluck them out of obscurity. ‘Platoono of Uno’ closes the mini-album with a ferocious offering of guitar riffs, pounding drums and insanely intense vocals. “I am a man and I wanna be heard” echoes throughout fuelling the onslaught of sonic anarchy that is Antlered Man. Both lyrically and musically it’s hard for anyone to come close to this band right now.

With sessions and interview support from John Kennedy at XFM and praise from Kerrang, Rocksound and Artrocker, Antlered Man’s future looks bright. It won’t be too long before they are on every rock fan’s ipod. Antlered Man are Danny Fury (guitar), Damo Ezekiel Holmes (vocals), Sam Ray (bass) and Oliver Parker (drums) with Sarah Townsend (flute).