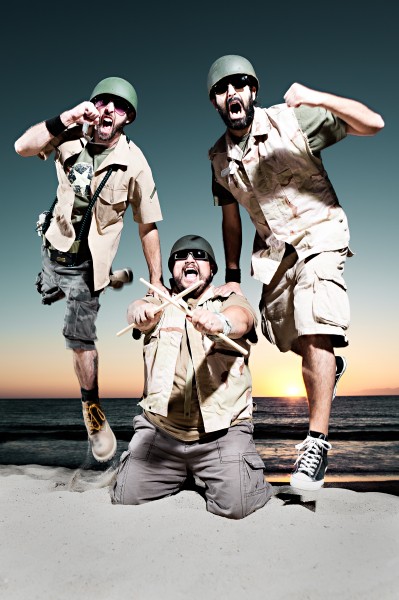 In the modern music landscape, how does an independent rock band separate itself from the tens of thousands of other bands clamouring for the spotlight? For Margate, a high-energy three-piece rock band in the vein of Foo Fighters, Rise Against and Bad Religion, the answer has been ingenuity, camaraderie, hard work and perseverance.

Margate formed in Los Angeles in 2003 after the members had spent years perfecting their craft with other groups. After several personnel changes, the band solidified its line-up in 2006 with Alex Helbig on drums and lead vocals, Steve Weil on bass and Doug Mitchell on guitar. Steve and Doug both sing copious backups, and Margate is known for throwing 3-part harmonies and group vocals anywhere they can fit them in. Alex taking on both lead vocals and drums is something that sets the band apart from most other power trios, and was not part of the original design of the group. “We auditioned half the drummers in LA to try and get Alex out front, but nobody could play the tunes exactly the right way and Alex was killing it doing both so we just kept it that way” says Steve. With the addition of guitarist Doug Mitchell the band became a tight, cohesive unit and began pounding away writing new material, playing shows and getting the word out.

Rock ‘n Roll Reserve was recorded and produced by Paul Miner (ex-Death By Stereo bassist and engineer, producer/engineer for New Found Glory, Thrice, Atreyu, etc.) and Margate at Buzzbomb Sound Labs in Orange, CA. Highlights from the album include a cover of the Beatles “Eleanor Rigby”.

What lies ahead for Margate? “The sky is the limit,” bass player Steve Weil says. You see, the boys in Margate don’t take themselves too seriously. They know the day of the big rock star has come and gone, and they’re quite content with being “that little band that wouldn’t quit.” Guitarist Doug Mitchell says, “all we ever wanted was to get our music out there, to let other people hear what we created. We’re happier than ever making music together and we’ll continue to do so until someone physically stops us from rocking.”
The band have released the album’s opening track for streaming on Soundcloud: