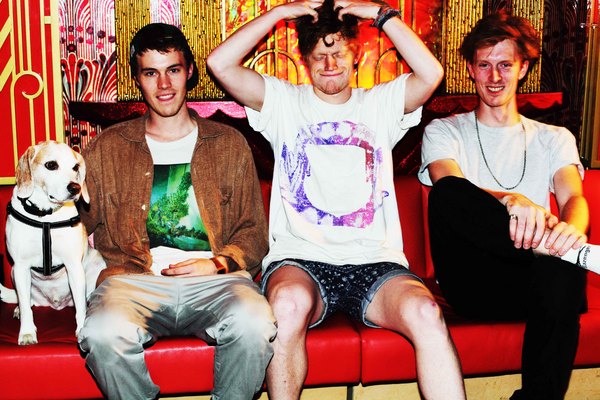 Beaty Heart formed in 2010 as a video-art and music collective based in Peckham. After a year of bedroom recordings and strange and wonderful live sets, the collective developed into a band. The forthcoming EP is the result of several months in the studio honing their ‘psychedelic drum pop’.

Visuals make up a cornerstone of Beaty Heart’s normal live set and the band are still very much involved in video-art. As a natural culmination of their previous work, the trio has been given the opportunity to perform a special show at The Roundhouse this month as part of Ron Arad’s ‘Curtain Call’. The curtain is made of 5,700 silicon rods forming an 18-metre ring in the middle of the main space at The Roundhouse, visitors will be able to walk in and out of the ring, allowing themselves to be “engulfed by images”. Additionally, when people pass through the curtain, ripples of their movement will be sent through the rods affecting the visuals.

For the show, Beaty Heart have collaborated with Eyes on the Wall on a documentary entitled ‘10,000 Miles from a Car Window’, which will take the audience on an animated journey from London to Mongolia in and around the curtain. Beaty Heart have also created a brand new composition which will be played live as a soundtrack to the documentary with the band performing live in the Roundhouse mainspace.

With their debut EP and imminent performance at The Roundhouse, Beaty Heart stand out as a constantly evolving project, a fluid entity that is ripe for discovery.