DUE FOR RELEASE ON SEPTEMBER 5th 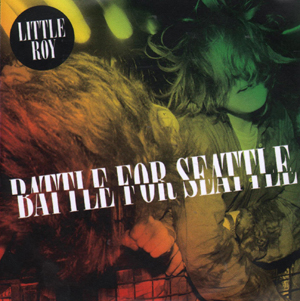 Listen to Little Roy’s version of Come As You Are here: http://www.youtube.com/watch?v=I1aEo4SkOWg

Little Roy has announced details of the release of his album, Battle for Seattle, through Ark Recordings on Monday 5th September 2011.

A collection of 10 songs recorded by Nirvana in a reggae style, the album is the brainchild of Prince Fatty, aka Mike Pelanconi and the Mutant Hi-Fi, aka Nick Coplowe, and it features the vocal talents of Little Roy, one of the great singers from Jamaican music’s classic era in the 1960s and ’70s, who cut tunes with Studio One, Matador, Prince Buster and Lee ‘Scratch’ Perry.

Being a fan-of-old, Nirvana was the obvious choice for Prince Fatty when considering the idea of a ‘whole album cover version’. Obviously, the choice of singer, who’d have to step into Cobain’s shoes for ten tracks, was crucial. “I’ve worked with Little Roy for a long time,” says Mike, “and so I knew tonally it was right for him.”

A man with the ‘right credentials’ Little Roy cut his first single at the legendary Studio One in 1965 and grew up in Kingston surrounded by many of Jamaican music’s biggest hitters – Prince Buster, Lee Perry, Bunny Wailer & Peter Tosh. Later a growing interest in the emerging rasta religion saw him release some early roots classics such as ‘Prophesy’, ‘Christopher Columbus’, and ‘Tribal War’.

With a heavyweight figure like Little Roy on the team, ‘Battle For Seattle’ was never going to be anything other than totally authentic. However, the album has prompted joy and admiration from everyone that’s heard it, on both sides of the musical fence – reggae, and rock.

“We had the best intentions at heart,” says Prince Fatty. “We had to think about it from both sides. We wanted to be respectful to Nirvana, and Little Roy. He’s the real deal. We couldn’t just rip into this.”

Little Roy admits it was a struggle getting to grips with the songs. “When I listened to the lyrics as he sung them, I found it hard to pick up on what he was saying. The lyrics came too quickly for my ears and were buried in the music. It sounded to me like he was crying out. You have to listen deep to get it. The melody was always there, though, so I knew this was a chance for me to bring them up so people could really hear what Kurt was saying. People could enjoy the words of these great songs through me singing them in my reggae style – reggae fans like me who didn’t know about Nirvana would love the songs, and Nirvana fans could enjoy the music all over again.” He laughs. “Music is not a one-road thing, you know.”

For this reason, perhaps, ‘Battle For Seattle’ has had the thumbs-up from the original Nirvana camp and from many of their friends, including the bands original agent Russell Warby who is releasing it on his own label Ark Recordings. Also, photographer Charles Peterson, the man responsible for Nirvana’s ‘Bleach’ album cover shot, who helped define the look of Sub-Pop and Seattle internationally, provided the front image for this release.

As for Little Roy, does he feel that ‘Battle For Seattle’ matches up to the giants of reggae? “Yes, there is a parallel,” he says. “You know, Bob Marley – he’s great – he would say, ‘One good thing about music, when it hits you feel no pain’. So it’s just the same thing – when these Nirvana songs hit you, you’ll feel the music, and no pain.”

Converse and 100 Club are excited to announce Little Roy & Prince Fatty will present the debut show of ‘Battle for Seattle’ with very special guests including the legendary Don Letts and Hollie Cook for the August date of their curated series at the legendary London music venue. Tickets are free and will be available exclusively via the Converse UK website www.converse.co.uk and Size? www.size.co.uk from the 16th August 2011. Little Roy will also bring a full set of Nirvana tracks from the album to both Reading and Leeds Festivals this year. Don’t miss this!