Among Brothers are a Cardiff-based six-piece, often compared to the likes of Efterklang, Grammatics and Anathallo. The band release their new single Loved in Sept via Xtreme Music. 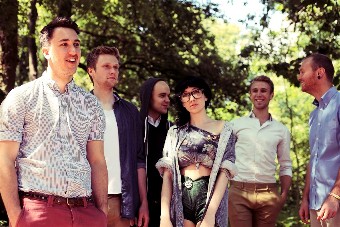 The band play the following date in London:

You can see the band’s Radio 1 Big Weekend performance at:

“The most exciting thing about Cardiff this spring” – The Fly

Their debut EP, Homes, was released earlier this year on their own label, Barely Regal Records. Homes features the song ‘Sam, Isaiah and the Wolf’, which was chosen by Bethan Elfyn as one of her top tracks of 2010, alongside bands like Warpaint, Foals and Islet. They have also featured on The 405’s compilation: ‘Heroes Of January And February 2011’ which also featured Toro Y Moi, Vessels and Munch Munch.

Among Brothers were described as “one of the festival highlights” by SWN organiser John Rostron, after playing their Barely Regal stage at SWN Festival 2010 to a sold out venue. This year, the band has gone on to support prominent bands such as Jeniferever, Hjaltalin, and The Thermals. Shortly after returning from their Spring 2011 UK tour, Among Brothers played the Introducing stage at the Radio 1 Big Weekend in Carlisle. This led onto their song ‘My Head Is A Vessel’ being selected to feature on the BBC Radio 1 playlist in June this year.

“Homes is a beautifully styled and thoroughly emotive EP” – The 405

“One of the festival highlights” – John Rostron, SWN Festival organiser

September 2011 sees Among Brothers play End Of The Road festival, alongside artists such as Laura Marling, Mogwai and Wild Beasts. Shortly following the festival, the band will set out on their second UK tour of the year to promote a brand new single. You can catch the band live in Sept on the following dates: