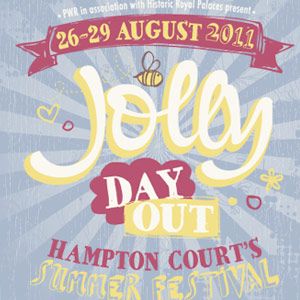 Jolly Day Out, Hampton Court’s new Summer Festival is excited to unveil the final music line up for the Bank Holiday festivities.

On the main stage, there will be a showcase of family-friendly popular music. Imelda May will open the festival on Friday 26th August and supporting her will be Size 9, an eight piece band from South London, fusing funky-soulful sounds from the past with a distinctly contemporary and urban feel to create their own organic and original music, Parade, an all-female band with their groovy, RnB pop with a touch of street style, Oh My! a girl duo, who are signed my 679 – the label who kick started the careers of Dizzee Rascal and Plan B and Lucy Morris, fresh from her performance at the Isle of Wight Festival.

On Saturday 27th August, Bjorn Again will be headlining and supporting them will be, Tankus the Henge a six piece powerhouse of a band who embody a look and a sound that lies somewhere between their South East London home and the carnival town of New Orleans, Mamas Gun who combine the euphoria of soul and Motown with the spirit of Stevie Wonder and Marvin Gaye and Daniela Brooker, who was picked up by Chris Evan’s Breakfast Show and Hit Sheet heralds her as “definitely one to watch”.

McFly will be headlining the main stage on Sunday 28th August and will be supported by AJ, already dubbed by the media as Britain’s ‘Prince of Pop’, this singer-songwriter has spent the last year touring the UK on a string of promo dates alongside artists such as The Saturdays, Peter Andre, Chipmunk, Scouting for Girls and former X factor winners, Size 9 and City Stereo a nationally up and coming pop-rock band performing their trademark, energetic mix of pop-rock.

The Festival will close on Monday 29th August with Sing-A-Long-A Sound Of Music and a spectacular fireworks display. The support acts including Chelcee Grimes with her urban pop songs packed with hooks and lyrical twists, Daniela Brooker and funk rock fusion from Soul Trigger.

So, grab your friends and enjoy the bank holiday weekend with great music and entertainment. There will be Pimms, beer and Champagne tents as well as delicious food available from Jamie Oliver’s Fabulous Feasts, Pizza Express, Maggies Farm, SoulFoods Co and Flaming Cactus to name a few. There will be a delightful Summer Market stalls jam packed with arts & crafts, gifts & jewellery as well as delicious homemade cakes and fudge.

Jolly Day Out also has plenty of kids entertainment throughout the day, whilst the bands play. We will have live shows from Charlie & Lola’s Best Bestest Play* from the BBC hit TV series, the stage show of HORRIBLE HISTORIES and the Zingzillas performing. There’ll be hourly story- telling from The Roald Dahl Museum, interactive demos and experiments from the Science Museum and Henry the Apes Arena. Learn circus skills in our very own Big Top, make arts & crafts, faces painting and a traditional funfair as well as the Moshi Monsters who’ll be at Jolly Day Out on Saturday and Sunday. There will also be the chance to bet on your favourite Pig, with Pig Racing every hour, see the special Dancing Sheep and get stuck in with Welly Wanging.

All this and much more will be available in an afternoon of British summertime fun!

Tickets are free for kids 12 and under

Each adult ticket entitles you to 2 free kids tickets

* No alcohol or food is permitted to be brought into the Festival.

Extra information – Theatre Tent tickets
Tickets for each of the Charlie and Lola shows and Horrible Histories shows need to be booked in addition to your Festival Tickets and as numbers are limited, advanced booking is highly recommended.  Tickets for these shows are only £4.50 per person so simply select the date you have booked for the Festival and the Theatre Tent show and time to ensure you are there.

Show times are as follows each day:

Historic Royal Palaces is the independent charity that looks after the Tower of London, Hampton Court Palace, Banqueting House, Kensington Palace and Kew Palace. We help everyone explore the story of how monarchs and people have shaped society, in some of the greatest palaces ever built. We receive no funding from the Government or the Crown, so we depend on the support of our visitors, members, donors, volunteers and sponsors. These palaces are owned by The Queen on behalf of the nation, and we manage them for the Secretary of State for Culture, Media and Sport. We believe in four principles. Guardianship: giving these palaces a future as long and valuable as their past. Discovery: encouraging people to make links with their own lives and today’s world. Showmanship: doing everything with panache. Independence: having our own point of view and finding new ways to do our work. www.hrp.org.uk Registered charity number 1068852