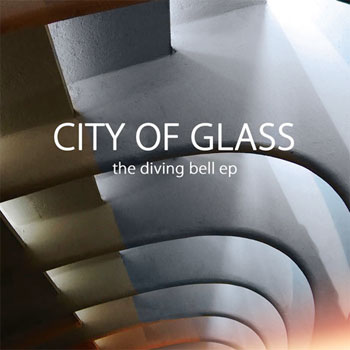 Diving Bell EP is the second EP from Canadian duo City of Glass. This four track EP is acting as a precursor to their forthcoming album which should be out in 2012.

Taking influence from the likes of Radiohead and The Cure so it’s fairly safe to say this isn’t EP for happy campers.

Lack of jovial nature aside what you have is a collection of brooding atmospheric indie-rock with driving drum beats. The whole EP is drenched in various effects (but mostly reverb) to create swirling soundscape that interplay with the gentle guitar riffs. When all the instrumentation comes together it has quite a minimalist sound but what stops it from falling it the wishy-washy-get-to-the-point nature of many of these tracks is that it benefits greatly from having superb structures that keep them tracks from becoming predictable.

What holds them back is that despite creating very evocative soundscapes and brooding music there is some restraint that can leave you feeling slightly cold in the end. The EP is absolutely great to listen to and to let the music wash over you but once it’s over it doesn’t much of a lasting impact.

For all it’s negative’s this is a band that in many ways is in it’s early days and we haven’t seen the best of them yet and with their album looming on the horizons it’ll be best to reserve judgement to reserve opinions until then. But this EP, along with the previous one, is a very promising start and one that has a upward path.