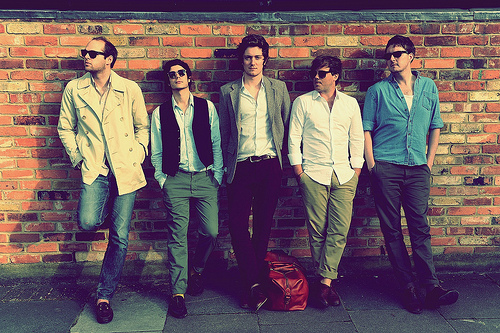 AAAmusic: Hello. It’s a bit difficult thinking of questions off the top of my head, given your site already has an “about” FAQ style section that deals with the usual interview fare! Anyhow, I noticed you refer to yourself as a collective rather than a band. Is there any particular reason behind this?

Josh Bowyer: Maybe because it feels more creative and communal, like an artistic kabutz; we are at the mercy of an idea rather than the other way round. Although probably just because it sounds cooler.

AAAmusic: Your debut single, ‘Elephant Room’, feels like an echo from The Beatles in its gentle poppiness, but other songs demoed on your site seem more experimental in their sound. What are you mostly aiming to do with the songs you write?

I guess every song to me is an exercise in trying understand other people. Capturing a poignant moment and translating it into music with a wilful optimism. We are on a crusade to bring karma to world and get rich and famous along the way. Although that’s definitely not the objective. Definitely not.

AAAmusic: Following on, what would you say is generally the songwriting process within the band?

I lock myself in a room with a piano and then emerge 3 months later with a jumble sale of ideas. There’s always a few gems in there that we cherry pick as a group and begin the crafting process which usually takes months of rewriting and rewriting until we are happy.

AAAmusic: What would you cite as your influences, musical and otherwise?

Tricky one: Beatles, Ginsberg, Spielberg, Chris de Burgh, anyone who has slain many dragons to reach a princess.

AAAmusic: Your songs seem to often have a sense of the bittersweet in them. Do you tend towards a particular mood, either in the music or the lyrics, or does it just depend on how everyone is feeling or aiming for at the time of writing?

All of our songs begin with a romantic perspective on something so you need a bitter to make the sweet taste good. I am very optimistic but overtly happy songs about being happy make me suicidal. One of my favourite songs is ‘Wonderful World’ by Louis Armstrong. If you change the bitter minor chords to major sweet chords the song is terrible.

AAAmusic: You say you want to write giant, timeless songs. What would you say makes a song truly timeless?

I guess a timeless song doesn’t rely on a trend or a social movement to make it feel timeless. If the song writing is honest and strong enough you could take it out of one era and click it into another and it would still be just as evocative. Like most of the Beatles songs. We’re not there yet but we’re on the right track.

AAAmusic: Finally, do you have any band recommendations to make to our readers?

I absolutely love the latest Beach House album. Other than that, Wave Machines are great – I saw them live a couple of months ago, and they were brilliant, so definitely worth checking them out’.